Not even a sudden stomach upset on match point could deny Ons Jabeur the greatest victory of her career.

The trailblazing Tunisian found a quiet corner of Centre Court, discreetly vomited and returned to the baseline to serve out the match.

The 24th seed knocked out 2017 champion Garbine Muguruza 5-7, 6-3, 6-2, becoming the first player from her nation to reach the second week of Wimbledon. 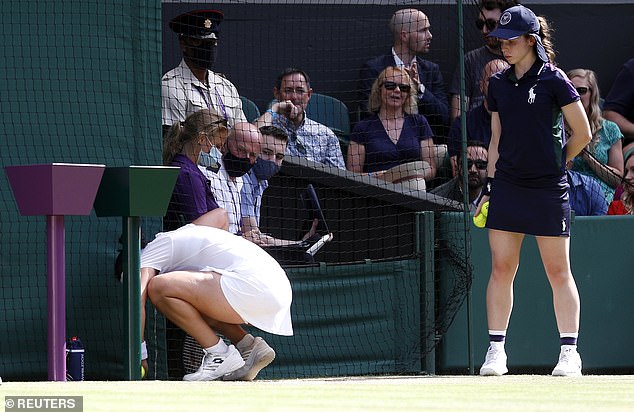 ‘It means a lot,’ said the 26-year-old. ‘Especially so many Arab people watching me and supporting me. But I don’t want the journey to stop here.’

On the incident before match point, she added: ‘I’m having a problem with my stomach. I have inflammation. It has been going on for a while. It bothers me probably with the stress, fatigue, everything. I know everybody was talking about it — I’m OK. I just have to throw up!’

A nip-and-tuck contest turned on a run of 16 points in a row by Jabeur to win the second set and claim a decisive lead in the third. It was the longest sequence on Centre Court since they began keeping records in 1977.

Jabeur is an artist of a player; a drop shot aficionado and one of the finest volleyers in the women’s game. The highlight was a once-in-a-lifetime winner hit around the net post. 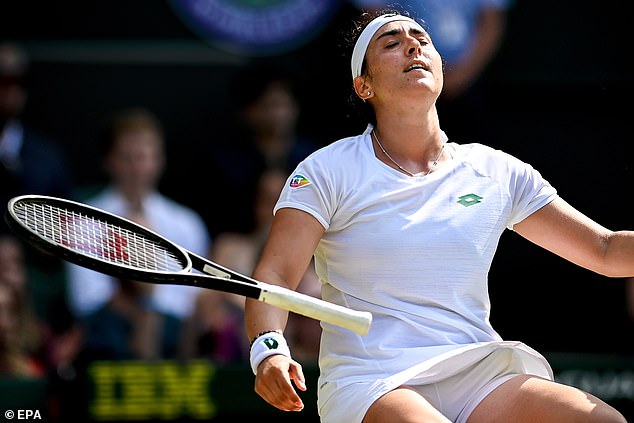 She takes her role as the lone Arab woman in top-level tennis seriously and what a wonderful ambassador she is.

‘I hope that so many of the young generation are watching and I can inspire them,’ she said. ‘Hopefully one day I could be playing with a lot of players next to me. Sometimes you need someone to inspire you.’

Jabeur will next face No 7 seed Iga Swiatek at Wimbledon, who thrashed Irina-Camelia Begu 6-1, 6-0. 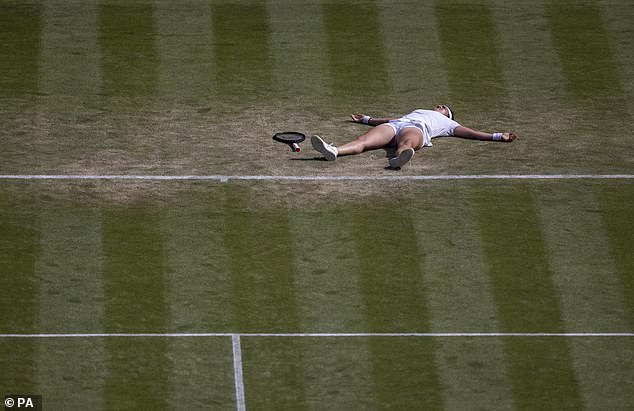 It was the first day not to see a top 10 women’s seed eliminated. As well as Swiatek, there were dominant wins for Arnya Sabalenka and Karolina Pliskova, the second and eighth seed respectively.

Pliskova, perhaps the best player in the world without a Grand Slam title, is yet to drop a set, beating countrywoman Tereza Martincova 6-3, 6-3.

The Czech said: ‘I’m playing the way I want to play. You can’t wait for mistakes, that’s the mindset on grass and I believe if I go for it I have a big chance to beat anybody. That’s the plan.’