Home » Tennis » ‘I want to enjoy the way I’m playing’: Composed Kyrgios waltzes into fourth round

When Nick Kyrgios hit a passing shot while up a break in the third set of his third round match at the US Open on Saturday (AEST), he celebrated with a few dance moves.

“Sometimes I just act stupid,” he said of the brief outburst of spontaneous joy in his 6-4, 6-2, 6-3 win over American JJ Wolf.

It was quite a change from the Kyrgios who felt anguished beating his bestie, Thanasi Kokkinakis, in the opening round, and whose temper seemed frayed throughout his second round win over Benjamin Bonzi.

Sure, Kyrgios lost his cool a few times – at one point after Wolf broke back in that set, Kyrgios screamed “help me” at his box – but by his standards he maintained a pretty good mood.

“I’m still extremely hard on myself,” he said. “Most people who won by that score would have no bad moments, but I still had maybe 25 moments where I got angry … But I am trying to work on it. I want me and my team to enjoy the way I’m playing. I’ve never been to the fourth round here, so we should celebrate.”

Kyrgios, 27, said he was pleased with the way he executed his game plan, knowing he had to be “switched on from the get go,” because Wolf is a player with an “exciting brand of tennis who takes risks”. 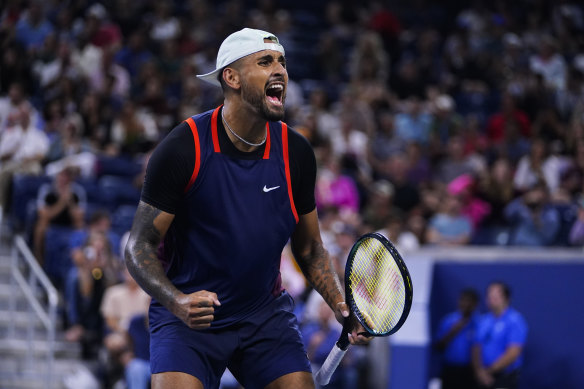 Showing off a solid crosscourt backhand and a remarkable restraint, Kyrgios played the wily veteran, inducing mistakes from the ambitious newcomer.

“I’ve [usually] been the one who played massive on every point, and it took me 27 years to figure this out,” he said. “I’ve been in that position that he’s in, and I know it drains you and I knew he’d want to play aggressively and put on a show. So, I just took a back seat today – I had some flairy points, but my number of winners were quite low. Being disciplined was my game plan.”

Kyrgios also gave a typically thoughtful breakdown of how his game has improved. Working without a coach, he said he broke down his game and decided he needed to improve his movement, his second serve and his forehand service return.

“So I’ve been getting in better shape and I’ve added more variety on my second serve and every day I spent five or 10 minutes on my forehand return,” he said. “That adds up to hours and now I’m not just massaging the shot and trying to get the ball into play, I’m trying to put pressure on players and break service.” 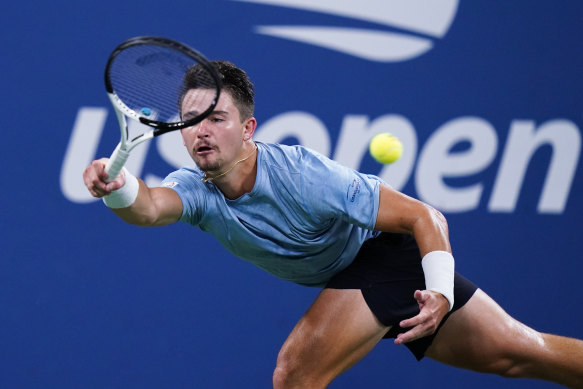 JJ Wolf was outclassed by Nick Kyrgios at the US Open.Credit:AP

He is proud of all that effort and how it paid off. He says he is now ready for his fourth round match against defending champion Daniil Medvedev.

“I want to play on the biggest stadiums in the world with millions of people watching me,” he said, adding he is motivated by knowing some people root against him, which makes victory sweeter.

“I want to be there playing the best players in the world. I have a game plan and I’m definitely going to play a certain way against [Medvedev]. My level is right there at this point. There are only a few players at the same level or better than me right now.”

Watch all the action from the US Open ad-free, live & on demand on Stan Sport, with centre court matches streaming in 4K UHD from Tuesday 1am AEST.