London: Australia’s James Duckworth lists the ailments and surgeries that have curtailed his tennis career as everyday folk might simply go through their shopping list.

When he takes the court in the first round at Wimbledon this week, he will be coming up against a player with whom he can compare battle scars. 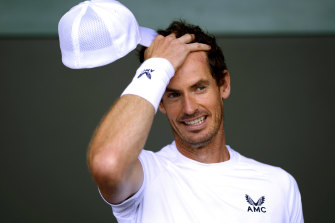 Andy Murray could write the book about hip surgeries.Credit:AP

The 30-year-old, who reached a career-high ranking of 46 in January after an eye-catching run of results in the back end of 2021, succumbed to his latest complaint and had hip surgery after the Australian Open.

Now, however, he’s back on the tour, and has drawn two-time Wimbledon champion Andy Murray in a first-round clash at the All-England Club.

When it comes to hip surgeries, three-time major winner Murray could write the book. In fact, he did the next best thing, his well-chronicled battle with hip ailments after climbing to world No.1 in 2016 forming the basis for the Amazon documentary Resurfacing.

And Murray and Duckworth have another connection – Duckworth’s recent surgeon, Melbourne-based hip specialist John O’Donnell, has operated on both players.

“I had my first elbow operation in 2012,” said Duckworth, listing the number of times he’s gone under the knife. 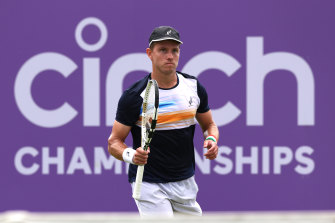 James Duckworth has a long history of injuries.Credit:Getty Images

Unsurprisingly, the Murray-Duckworth clash will be a centre court feature on day one in London, for the strawberries-and-cream crowd remains besotted with the Scot’s tennis fortunes.

It’s a tough opening assignment for Duckworth against a “pretty inspirational” opponent, now with a metal hip, he has inevitably come to admire.

“I always loved watching him play,” said Duckworth, who has described his own physical status as a “work in progress”.

“I’ve played him a couple of times – once at the US Open, once in Brisbane. He’s obviously an incredible player, an amazing career, still going … very cool to see him still going with the injury that he’s had on his hip.

“He’s been through a lot physically … someone like that is pretty inspirational.”

Duckworth is taking things as they come, his latest injury lay-off meaning a return to his best might take some time.

“I didn’t play a tournament for 16 weeks.

“It was a bit unfortunate. I was playing pretty well at the end of last year.

“To have that momentum stop was tough, but I’m back now, and slowly getting a bit better each week.

Watching Murray’s documentary, a fly-on-the-wall account of the injury which almost pushed the now 35-year-old into retirement, it’s apparent that the Brit’s sheer love of the sport was the driving force that kept him going.

Duckworth comes with a similar love of competition.

“I enjoy pushing myself. I enjoy the one-on-one battle.”

No vax for Djokovic, will miss US Open unless rules change

Novak Djokovic knows that, as things stand now, Wimbledon will be his last grand slam tournament of 2022 because he will not be able to play in the US Open – he has not received any COVID-19 shots and can’t enter the United States as an unvaccinated foreigner.

“That,” the 35-year-old from Serbia said on the weekend at the All England Club, “is an extra motivation to do well here.” 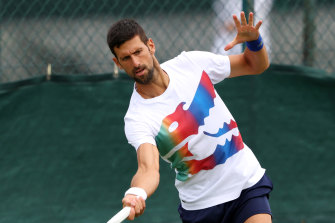 Novak Djokovic has reiterated that he will not be getting vaccinated against COVID-19.Credit:Getty Images

Djokovic began this season tied with Rafael Nadal and Roger Federer at 20 major championships, then the record for a man. But Djokovic’s decision not to get vaccinated led to his deportation from Australia before the Australian Open in January – and Nadal wound up winning that tournament to get his 21st.

Nadal then beat Djokovic in the quarter-finals at the French Open en route to earning his 22nd slam title this month.

When Wimbledon starts on Monday, Djokovic will have the honour of opening play at centre court as the defending champion. He is seeded No.1 and will be bidding for a fourth consecutive title at the All England Club and seventh overall.

“Hopefully I can have a very good tournament, as I have done in the last three editions. Then I’ll just have to wait and see. I would love to go to States. But as of today, that’s not possible,” said Djokovic, who has come down with COVID-19 twice. “There is not much I can do anymore. I mean, it’s really up to the US government to make a decision whether or not they allow unvaccinated people to go into the country.”

A reporter noted that Djokovic does still have time to get vaccinated before play begins at Flushing Meadows on August 29, and then asked him whether “you’ve completely closed your mind to that as an option”.

Djokovic replied with one word: “Yes”.

At Wimbledon, Australian Thanasi Kokkinakis is hoping to face Djokovic in the second round, provided Djokovic wins and Kokkinakis can beat Poland’s Kamil Majchrzak.

Australia’s new No.1 woman ‘kind of my worst enemy’

Ajla Tomljanovic has identified the key to stepping up as Ash Barty’s Wimbledon successor: getting out of her own way.

Tomljanovic carries the status of Australian women’s No.1 in Barty’s non-title defence at the All England Club.

It’s a huge responsibility, especially for a player who finds it difficult to treat even herself as No.1. 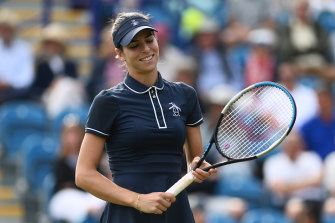 “I’m just going to try my hardest to get to the next round without putting that pressure of being hard on myself because that’s what kills me the most,” Tomljanovic said ahead of her first-round tussle on Tuesday with 18th seed Jil Teichmann.

“I’m kind of my worst enemy sometimes and that’s all I’ve got out there – myself – and I’m trying to change that and be my own best friend in the moments when I need it.”

Tomljanovic enjoyed a breakout run to the quarter-finals last year, eventually falling to Barty, who famously went on to become Australia’s first ladies champion at Wimbledon since Evonne Goolagong Cawley in 1980.

Tomljanovic attributes her success to going easier on herself and knows she needs a similar approach to have a chance of an equally memorable campaign in 2022.

“I wasn’t in a bad spot last year, but I just felt like things weren’t really happening,” the 29-year-old said.

“I remember thinking, ‘you know what, I’m just going to make a go,’ and I just wanted to win the first round.

“That was my main goal. Once I did that, usually what I do is I want to win the next two and, if I don’t do that, it’s disappointment.

“It’s just believing that I can do it without thinking about the result, which is very hard to do.”

Watch all the action from Wimbledon ad-free, live & on demand on Stan Sport, with matches streaming in 4K UHD from June 27. Coverage of select matches commences on 9GEM from 7.30pm (AEST) each night.