Home » Tennis » Her numbers don’t stack up, but Serena is the GOAT

How do you weigh a GOAT?

As in, when it comes to working out who is the Greatest Of All Time, what matrix do you use? In tennis, the question is never more apposite than this week due to the pending ending of Serena Williams’ career, at the US Open, at the age of 40. She has won her first round match and will hopefully go deeper still but, one way or another, her final hour of power on the court of dreams is not far off.

As to whether she is the GOAT, at first glance it seemed to me the answer was obvious.

I thought – as you surely thought – that the key measure was simply how many majors you had won, weighted against just how heavy the competition was against you at the time. For yes, though Serena Williams will almost certainly finish with one grand slam fewer than Margaret Court, few would argue in favour of Mrs Court given that half of the Australian’s career spanned the less intense and competitive amateur era. (And if we can indulge in a little “what-if” for a moment, who could doubt that that Williams’ power game, her sheer athleticism, would blow Court off the same?)
But here’s the interesting thing. The New York Times noted this week that what seems obvious as the key measuring stick has changed over time.

“Nowadays, the grand slams are much more revered than they were in my time,” Martina Navratilova told the paper, while Rod Laver was quoted as once saying, “We really weren’t concerned with the number. I’m not sure I even knew exactly how many I had.”

Amazing, yes? Just like, now, cricket players and followers revere the Baggy Green, and yet that has truly only been a thing, since the age of Steve Waugh. 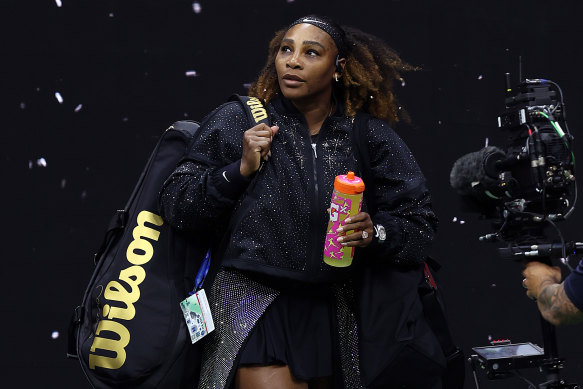 Serena Williams enters the Flushing Meadows arena for her opening-round match this week.Credit:Getty

Other indices pointed out by the NYT: in terms of total weeks at No.1, “Williams ranks third . . . [Steffi] Graf leads with 377; [Martina] Navratilova is next with 332. Though Williams finished as year-end No. 1 on five occasions — another significant measure of success — Navratilova did it seven times and Graf a record eight times”.

And when it comes to net number of tour singles titles, “Williams’s total of 73 puts her fifth on the open-era career list, far behind Navratilova, who won 167 singles titles…”

My memory of Serena Williams is of her sweeping all before her in just about every encounter, but that memory is clearly faulty when you divide net wins by net number of years on tour — 27 — she averaged less than three tour singles titles a year?

Part of the explanation, and it also helps illustrate her longevity, is that the American superstar didn’t simply go from tournament to tournament week after gruelling week for years on end like Navratilova did, and was far more choosy. When she played it was automatically an event – but even allowing for that, the stats don’t fall her way.

For it goes on: “Graf … had a career winning percentage in singles of 89 per cent, the best of the modern GOAT contenders (Williams is at 85 per cent).”

You get the drift. Calling Serena the GOAT is not nearly so obvious as most of us thought.

No one changed the way the game itself was played like Serena Williams did.

Why, then, can we be confident that Serena really is exactly that?

I reckon the clue is contained in another NYT headline: Serena Williams Dominated Her Generation, Then the Next One, Too.

For ain’t that the thing? When you weigh up Greatest of All Time, then surely the sheer span of time spent dominating has to be one of the key factors of all? And this is where Williams seriously blows all other contenders away. She’s been holding court, on court, for nearly three decades! As to her dominance of the grand slam events, she went from 1999-2017 — with a chance, however small, of adding to that — while Court went 1960-1973, Graf 1987-1999 and Navratilova 1978-1990.

And there are two final factors in giving her the award, in my view. 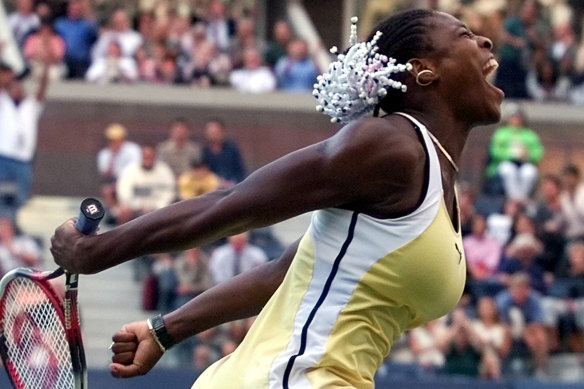 A jubilant Serena Williams after beating Lindsay Davenport en route to winning the 1999 US Open.Credit:AP

Did anyone else come close to her sheer show-womanship? (If that’s a word?) Who else could hold the crowd in the palm of her hand, like her, whip them up as she wiped ’em out, the way she could at will? Who else could head onto court like she did on Monday, with 400 diamonds hand-sewn into her dress? Only Serena Williams.

Most significantly of all?

No one changed the way the game itself was played like Williams did. Her emergence meant that the only way for others to even begin to compete was to try to match her athleticism and power. If you could also come armed, like her, with a first serve that could put a hole in the side of a battleship that would help.

All up, you can call me a genius if you like, or even Captain Obvious – it doesn’t matter to me – but there can be no doubt that Serena Williams really is the Greatest Of All Time. And Billie Jean King’s caveat that she is technically only “the greatest of her time, since every generation gets better,” notwithstanding, I still feel confident in saying: Fare thee well, Serena Williams, we will not see your like again.

Watch all the action from the US Open ad-free, live and on demand on Stan Sport, with centre court matches streaming in 4K UHD.