Home » Tennis » Heather Watson: ‘It’s vital everyone has the chance to pick up a racket’

The British No.3 told of the importance of giving disadvantaged children more opportunities in the sport and revealed she is excited about the future of the women’s game. 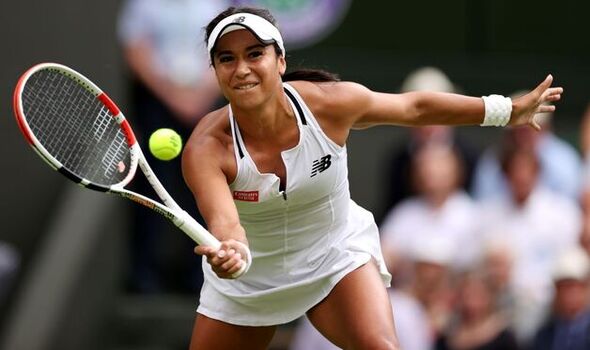 Heather also defended players who show their emotions on the court – saying it makes the sport more exciting.

The 30-year-old, who just reached the fourth round of Wimbledon for the first time in her singles career, is currently training for the next string of tournaments in the US.

Born in Guernsey, she was six when she first tried tennis and went professional after winning the junior US Open aged 17. She is keen to give youngsters the same shot, which is why she is player ambassador for Give It Your Max.

Heather said the aim of the charity is to, “work with young children and give them the opportunity to pick up a racket and play tennis in some of the tougher areas of London.”

She said: “It’s my way of giving back and it’s really important to give people the opportunity. You never know what that can give a person, whether it’s friendship, social skills or actually becoming a professional athlete as a career.”

And her advice for those wanting to take up the sport is to “always keep finding ways to have fun and enjoy it.”

She said: “Always give your absolute best because you will feel so much better for doing that.”

“A lot of the girls had great results and we have got a lot of strength and depth now “It’s really exciting for the future and hopefully we all just keep pushing each other.

“Everyone gets along well and supports each other as tennis is full of ups and downs. You can go from winning a massive tournament to losing a first round the next week. You have to take it with a pinch of salt.”

And players must be allowed to show their emotions on court without fearing being punished: “In sport there is so much pressure and emotion involved, it’s so hard to suppress your feelings sometimes. You’re only human.

“When I see a player that shows emotions I am way more interested in that match than somebody who does not show anything.”

She cautioned: “I don’t think being rude or attacking people verbally is the way to go.”

Describing it as a “great cause”, Heather said: “This will be so beneficial in the crisis we are going through. It’s so tough for so many families just to put food on the table, and that’s just basic stuff. It’s so sad to hear that.”