Home » Tennis » From the Archives, 1980: Goolagong Cawley’s second Wimbledon crown, this time as a mum

LONDON, Saturday – Evonne Cawley, the new Wimbledon women’s tennis champion, last night gave a strong hint that she will not retire for at least another year. 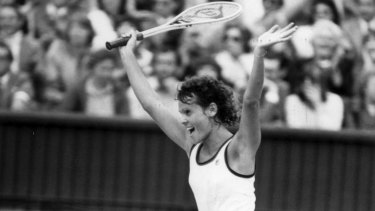 The 1980 Wimbledon women’s singles final was won by Evonne Cawley, who defeated Chris Evert-Lloyd of America 6-1, 7-6 to become the first mother to win the title in 65 years.Credit:Syndication International

She is the first mother to win the Wimbledon crown since Britain’s Lambert-Chambers in 1914, and is now likely to sign an endorsement contract with a baby foods firm worth at least $1 million.

The Mark McCormack organisation, which represents her, is certain to arrange other lucrative commercial deals.

With the opportunities to make a fortune quickly, Evonne and her husband, Roger, are sure to delay having a second child.

Evonne says she will play a few tournaments in Australia next summer and defend her Wimbledon title in 1981.

Asked whether her victory would affect her child bearing-schedule, she replied “It could. This sort of thing does spur you on a bit.”

She brushed away tears as she talked to the world press after yesterday’s victory.

“I was alright until I left the centre court and saw some good friends,” she said.

Winning her second Wimbledon crown, she added, was the most emotional moment she had experienced, since her daughter, Kelly, was born three years ago.

The new, determined and tenacious Evonne Cawley surprised and delighted the Wimbledon crowd and millions of viewers around the world.

There was no trace of the nerves which have deprived her of victory on other big occasions. 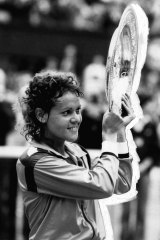 “I was really determined today,” she said. “I thought that if I was going to get that far this time, I really wanted to do it.

“In the past when I have played finals I have felt too loose and not aggressive enough. I haven’t wanted to win badly enough.

“I really wanted it this time. I knew if I played reasonably well against Chris I had a good chance of winning, and I wasn’t going to let that go by.

“But if it had gone to three sets I would have had more problems.”

Many thought a 55-minute rain interruption in the second set would upset Evonne’s concentration and possibly destroy the effortless rhythm of her game.

The score was one game all and 15-15 on Chris Lloyd’s service when the adjournment was ordered.

“I was a bit worried because I had got off to such a good start,” Evonne said.

“I knew that against Chris you don’t win until the last point. We have had so many close matches.”

In the dressing-room she said she had a shower because she didn’t want to get cold. She changed her clothes, had a cup of tea, and “just relaxed.”

When the players returned to the court, it was the normally ice-cool Chris Lloyd who seemed the more nervy.

She did not win another point on her service game, and was soon down 0-3.

But then she fought back strongly to level at 3-3, and fortunes fluctuated for the rest of the set until the Australian won a nerve-wracking tie-breaker 7-4.

Evonne said that when she dropped her service in the fifth, seventh and 11th games it made her more determined.

Each time, she immediately broke back.

“I was getting madder with myself,” she said.

Evonne dropped out of tennis in 1977 when her baby was born by caesarean section.

“I came back because I wanted to make sure that that was what I really wanted to do,” she said.

“I wanted to see if tennis and having a family would mix.

“But everything worked out well. Kelly was a good traveller and I was actually happier when she was with me on tour.”

A more frustrating time, she said, was when she injured her ankle early in 1978.

She struggled to get fit for Wimbledon 1978 but collapsed in anguish with a torn calf muscle in her semi-final with Martina Navratilova when close to winning.

It took nine months to recover from the calf muscle and ankle injuries.

But she was really not in top physical condition when she lost to Chris Lloyd in a 1979 Wimbledon semi-final.

Evonne spent hundreds of hours on a fixed bicycle building up her muscles.

“It was very monotonous, and there were a few times when I wondered if all the work and frustration were worth it.

“I knew I had to do it if I was going to play again. But when injuries take a long time to heal you begin to have your doubts.”

“He has given me confidence in myself,” she said.