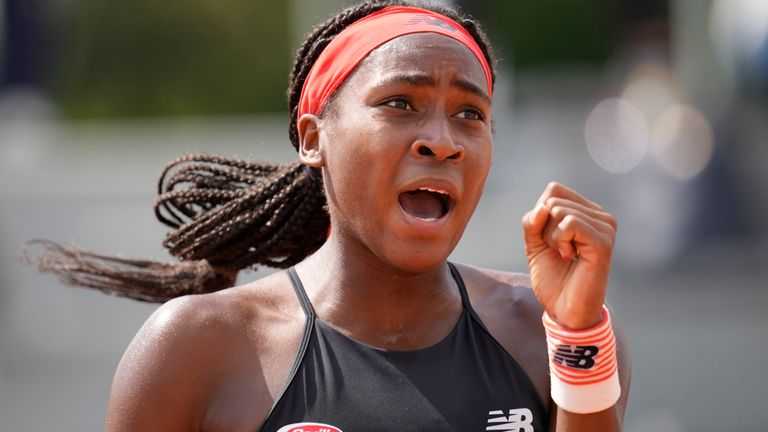 American teenage sensation Coco Gauff says she is “hungry and wanting more” after reaching the quarter-finals of a Grand Slam for the first time in her fledgling career.

The 17-year-old has been in excellent form on the European clay, winning a title in Parma and rising to a career-high ranking of 25 in the world.

She has form on the dirt too, having won the junior title at Roland Garros three years ago.

Gauff has an arsenal of scintillating shot-making and is self-assured on the court with a reputation for her never-say-die attitude. She’s the real deal.

Gauff is no respecter of reputations. Nor is she lacking in confidence, with the American prodigy continuing to make history on and off the court. She continues to urge people to speak out on the issue of racial injustice as she promises to continue using her platform to fight for change.

The teen star caused a sensation when she made the fourth round at Wimbledon two years ago and repeated the feat at the Australian Open in 2020.

Now she has gone one better and, if her form in a 6-3 6-1 victory over Ons Jabeur is anything to go by, she is a legitimate contender for the title.

“It means a lot to me, especially as I have lost in the fourth round a couple of times, so it feels good to get over that hurdle. Today I played probably my best match so far in the tournament,” said Gauff.

“It definitely does feel different. I just feel like it’s been, I guess professional. I feel like all my matches have been straightforward wins, like no crazy three sets and stuff. As we know, I have had a lot of those in the past.

“I just feel like this has been the most consistent tennis I have played at this level. Hopefully I can keep that going.

“In the past, I felt like I was satisfied with the run I made in the tournament, so maybe I came into the matches I guess not as hungry, and I know it’s probably not a good thing to say but it’s the truth.

“With a lot of young players, I think we tend to get satisfied with, not small results, but certain results before we realise that we can really shoot for more.

“My message has always been ‘dream big and aim higher’. I think that today was honestly coming from that message of aiming higher, because I could have easily said I’m satisfied with fourth round and everything, but today I think I just came in more hungry and wanting more.”

The talented teenager comes from a strong sporting family. She is coached by her father Corey, who played basketball at Georgia State University.

Gauff’s mother Candi, meanwhile, was a gymnast before competing in athletics at Florida State University. The family moved from Atlanta to Florida when Gauff was just seven to boost her tennis prospects.

She reached the showpiece of the girls’ singles at the US Open in 2017 aged just 13, making her the youngest ever finalist.

At the French Open the following year she won the title just a couple of months after her 14th birthday. Now she’s into the last eight of the women’s singles.

Gauff, who has also secured her qualification for the Tokyo Olympics, will face another first-time Grand Slam quarter-finalist – in singles at least – in Czech Barbora Krejcikova.

“I’m really just focused on the match ahead of me,” said Gauff, who has been relaxing by playing the card game UNO with her family.

“I don’t want to think far. Right now I’m focused on going to sleep tonight and winning the next UNO match and then tomorrow we focus back on practice and then get ready for the quarter-finals.”