Ashleigh Barty was relaxed enough on Saturday night to joke with the Centre Court crowd about her indifference towards England’s Euro 2020 hopes after she had played her way into Wimbledon’s fourth round.

The Australian world No 1 senses a second Grand Slam title is within reach. She is the only top-10 player left in her half of the draw and showing signs of the form that saw her win three out of six tournaments before injury halted that run in Rome in May.

But just when the 2019 French Open winner thought she could kick back and emulate her success in the 2011 junior singles here, Barty finds herself up against the in-form player in the women’s game. 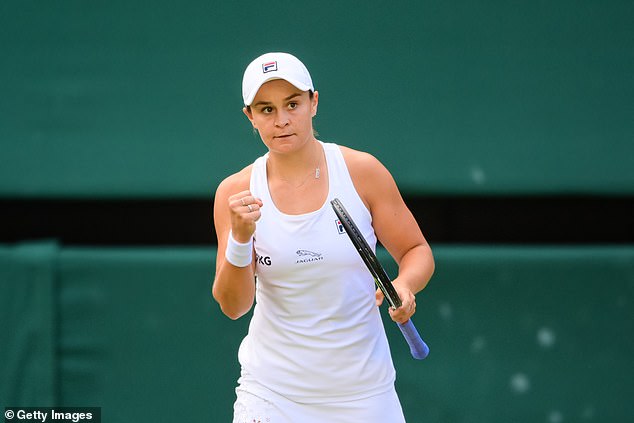 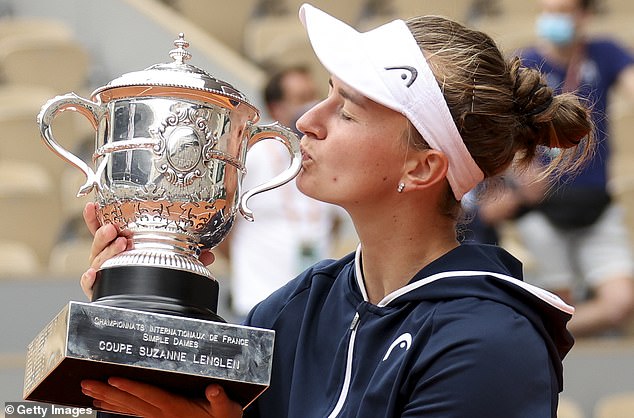 Barbora Krejcikova, seeded only 14, is on an extraordinary winning run of 15 matches. She won her maiden WTA title in Strasbourg and stunned the sport by clinching last month’s French Open.

Also 25, the Czech player has grass-court pedigree as the 2018 doubles winner with Katerina Siniakova, who Barty beat to set up this first meeting between the two players today.

Krejcikova said: ‘With every single match like this, I actually feel that even if I I’m tired, my legs are shaking or I’m not feeling well, I can still fight and I can still win. This is something I didn’t know that I actually had before I won in Paris.

‘I remember when Ash was 15, winning juniors here because I was playing as well. I actually like to watch her because she gives me a lot of motivation and inspiration to work hard.’

The respect is mutual, as Barty explained: ‘She’s had an exceptional last couple months. I have played her plenty of times in doubles, never on the singles court, so I am looking forward to working out how her game.’

Such is the chaotic nature of women’s tennis, just 10 of the last 16 have played in the second week at Wimbledon and the only former champion left standing is Angelique Kerber.

The German won here three years ago and a pre-Wimbledon title win in Homburg was her first success since then.

Standing in her way is the remarkable Coco Gauff, the teenage prodigy for once having to share the limelight with a rival emerging star in Emma Raducanu.

The American, aged just 17 and seeded 20, is yet to drop a set and is likely to have the crowd on her side. 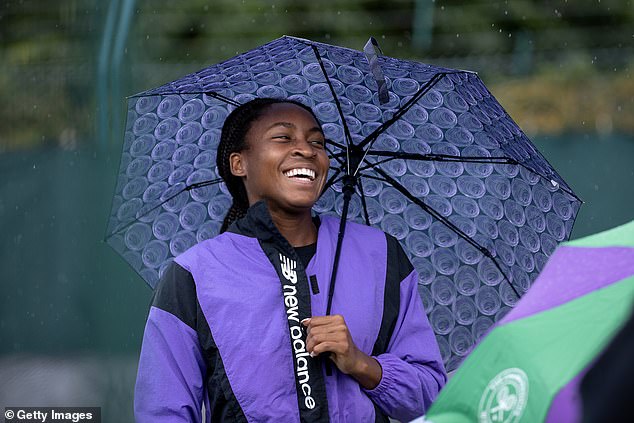 Gauff continues to take things in her stride, thanks in part to advice from former American First Lady Michelle Obama.

Recalling her breakthrough as a 15-year-old when she beat Venus Williams, Gauff said: ‘I went from not being known to everybody wanting something.

‘Mrs Obama told me it was OK to say no. That’s one thing I guess helped me emotionally and mentally off the court.’

It also means she is unlikely to be fazed facing the 2018 champion today.

Gauff added: ‘I remember when she won Wimbledon and a lot of people weren’t expecting it at the time. She’s really nice, too.

‘I think, to be honest, I’m just going to go out there and play free.’