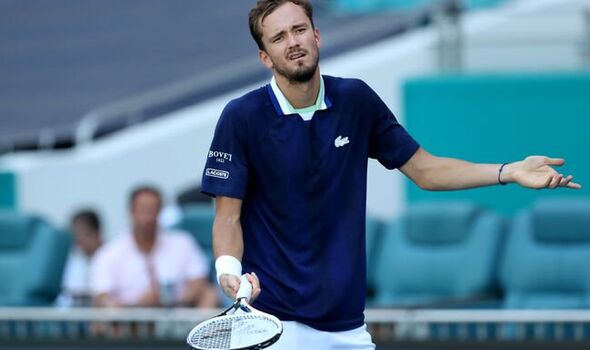 The row over Wimbledon’s decision to ban Russian and Belarusian players continues to rumble on with a number of stars speaking out on the issue. Last month, the All England Tennis Club confirmed the measure amid the harrowing situation in Ukraine, with thousands of civilians dead and more than 11 million having fled the country since the Russian invasion began on February 24.

Despite being warned of possible legal action by the ATP, organisers at SW19 have thus far stood firm despite mounting criticism. Russian player Andrey Rublev has slammed the “illogical” call, saying that instead prize money won by players from both expelled nations could have been donated to help Ukraine instead.

Novak Djokovic was another to speak out, arguing the war was not the fault of tennis players. The likes of Andy Murray and Rafael Nadal have also added their stances, with the Spaniard saying of his colleagues: “I feel sorry for them and I wish it wasn’t like this.”

JUST IN: Rafael Nadal request made by world No 10 at Madrid Open due to Real Madrid vs Man City

The most high-profile name missing from the men’s draw will be world No 2 and current US Open champion Daniil Medvedev – who reached the last 16 of Wimbledon last year. Also absent will be world No 8 Rublev, No 26 Karen Khachanov, No 34 Aslan Karatsev, and No 48 Ilya Ivashka.

The women’s draw will be even more affected though, with world No 4 Aryna Sabalenka, of Belarus, the highest seed set to relinquish a place. Joining her in not playing will be the current No 15 from Russia, Anastasia Pavlyuchenkova, and No 17 Viktoria Azarenka. Darya Kasatkina, Veronika Kudermetova, Ludmilla Samsonova, Ekaterina Alexandrova, Aliaksandra Sanovich, Varvara Gracheva, Anna Kalinskaya, Anastasia Potapova, and Kamilla Rakhimova, all inside the top 100 – are further absentees.

DON’T MISS:
Rafael Nadal request made by world No 10 at Madrid Open due to Real Madrid vs Man City
Andy Murray’s main weapon may be used against him in Denis Shapovalov Madrid Open tie
Ash Barty retirement verdict given by South Africa cricket legend – ‘Weird one to explain’

Vera Zvonareva and Vitalia Diatchenko are the two players outside the leading 100 to also be excluded. What could be of consolation to those banned though, is they may not miss out on ranking points.

ATP and WTA chiefs are reportedly holding a meeting in Madrid to discuss turning Wimbledon into an ‘exhibition event’ this summer. That means there will be no ranking points on offer to any players involved.