Emma Raducanu required medical treatment during her Citi Open tie against Camila Osorio as the heat took its toll on the British No 1. The 19-year-old was a set up but trailing in the second set when she called on he trainer at 6-5 down, needing treatment on her hands after suffering from blistering.

Raducanu appeared to be in pain and could be seen grimacing and checking her hands constantly as she sat down on her chair. In a gruelling encounter against her Colombian opponent, the two players had been on court for nearly three hours with temperatures rising to 36C.

The trainer came onto the court and appeared to apply treatment to the Brit’s right hand, with the procedure taking around six minutes to complete. Osorio cut a frustrated figure on court, having won four out of the last five games.

But Raducanu soon made her way back onto the court and managed to avoid losing the second set without going through a tiebreak first on her serve. 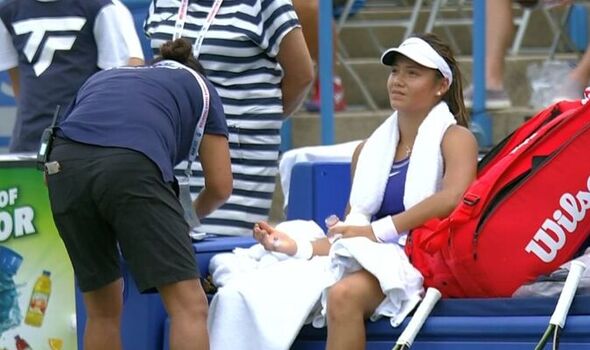 Despite the heat, Raducanu had managed to keep her head ice cold as she survived a first-set fightback from Osorio to edge the tiebreak after 81 minutes.

Having led 4-1 at one point, the youngster was forced to hold her nerve as Osorio produced some fine tennis to battle her way back into the contest.

It was nearly the same story in the second set too as Raducanu threw away a 4-2 lead and triple break opportunity to get pegged back to 6-5 in Osorio’s favour. That was until she called on the physio to undergo treatment before taking the second set to a tiebreak.

Seeded second for the tournament, Raducanu showed her class by seeing off Louisa Chirico 6-4, 6-2 to reach the second round against Osorio. She eventually found her way past her 20-year-old opponent to win it 7-6 (3), 7-6 (4) after two hours and 50 minutes to seal her spot in the third round. 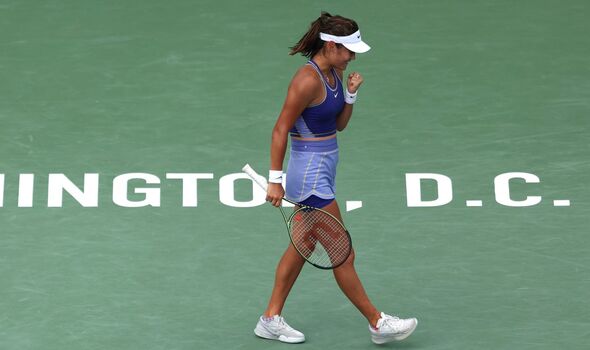 Addressing her injury, Raducanu said she had blisters on her hands and feet in her post-match interview. “It came out of nowhere to be honest,” she said on court. “At the beginning of the match I was alright, then throughout the match my skin was just ripping off.

“In the beginning, there was like a flap but then the flap got ripped off and it was pretty raw and open. Sorry if it’s TMI (too much information) but you know!”

Of the conditions, Raducanu said: “I think I died about three times in that match and then came back!”

“It’s really tough. After a set like that, there’s a lot of emotion going on. I had to tell myself to keep working, stay sharp because if I let up she would be right back in and that’s what she did.”