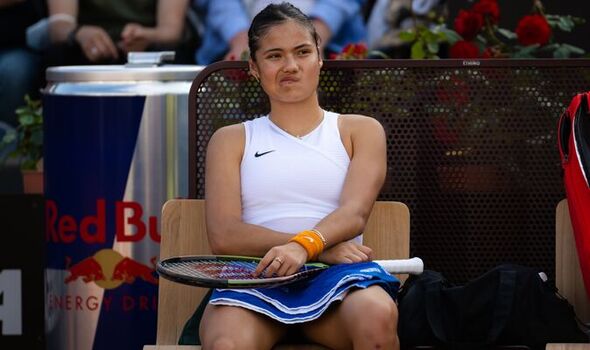 Tim Henman has raised fears for Emma Raducanu after the 19-year-old was forced to retire with a back injury while a set-and-break down to Bianca Andreescu in the opening round of the Italian Open. It is the third-consecutive tournament that the world No 11 has been plagued by the back issue and the former British No 1 admitted he thought Raducanu needed to get her coaching situation in order to give her a “sounding board” during her injury struggles.

Raducanu has been dealing with a back injury as she adjusts to the physicality of competing on the tour full-time. It appeared to worsen in her opening match in Rome as she was forced to retire against Andreescu on Tuesday, with the Canadian leading 6-2 2-1.

The back issue had already bothered her in Indian Wells and again last month in Stuttgart, and the 19-year-old admitted she had a “5 per cent chance” of winning her match against Anhelina Kalinina in Madrid last week as a result of the injury, losing in three sets. After her Italian Open retirement, retired British pro Henman shared his concerns for the teenager and advised she bring a coach on board as soon as possible to take the pressure off.

“This is first and foremost a physical problem,” he told Amazon Prime Video. “We’ve talked about really the lack of physical foundations because she just hasn’t had the opportunity to put in that work away from tournament play.”

The world No 11’s pre-season was derailed when she tested positive for Covid and the former world No 4 thought it had created a ripple effect on her 2022 season. He continued: That’s the ideal scenario in November-December time when you don’t have tournament play, you can do your off-season work that gives you that foundation. Unfortunately for Emma, she got Covid and she missed probably three-and-a-half weeks there and she’s just been playing catch up.”

Raducanu appointed renowned WTA coach Torben Beltz in the off-season but ended their partnership just two weeks ago, following her best result of the year as she reached the quarter-finals in Stuttgart. She said she would “transition to a new training model with the LTA supporting in the interim,” but Henman believes the US Open champion must appoint a head coach soon with her French Open debut looming.

He explained: “She’s only really performing at these tournaments with her own natural fitness. This is where we’ve discussed the coach and it’s hard for her because she’s going to have to shoulder all this responsibility.

“This is where, when things haven’t gone to plan, you need someone to use as a sounding board to have that experience and to put a plan in place. She’s played really well the last few weeks to get some good wins under her belt but this is where it gets tricky.

“She’s so young, so inexperienced, she’s never played these tournaments before and this is where her very small team around her will have to try and help as much as possible.” The 11-time title winner who supported Raducanu court-side during her run to the US Open title also hoped her retirement in Rome would make he re-evaluate her coaching set-up.