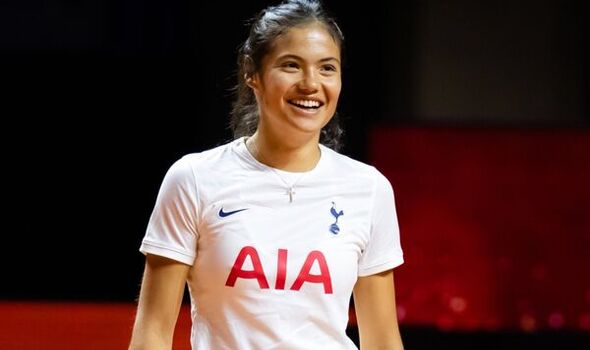 Emma Raducanu was pictured in a Tottenham shirt while preparing for the Stuttgart Open, allaying fears over the blisters that hampered her Billie Jean King Cup tournament last week. The teenager struggled through her match against former French Open finalist Marketa Vondrousova.

Raducanu was beaten 6-1 6-1 by the Czech as a foot blister caused her to limp through the contest. She had previously defeated Tereza Martincova in her tournament debut.

The US Open champion’s progress since that remarkable Flushing Meadows victory has been hindered by successive injuries. She had a delayed start to the season due to testing positive for Coronavirus and a hand blister then forced her out of the Australian Open.

“I don’t think that’s any secret and she’s working on it. The more she puts herself out there, the more she continues to test herself against the very best, she’ll figure out a way that works for her.”

But fears of Raducanu missing out on this week’s Stuttgart Open have eased after she was seen training in a Spurs shirt. The WTA tweeted a video of the 19-year-old donning the jersey, which had ‘Raducanu 10’ printed on the back.

Raducanu is known to be a Spurs fan and received a congratulatory tweet from striker Harry Kane after winning the US Open last September. The England captain wrote: “Amazing achievement @EmmaRaducanu. Done yourself and the whole country proud. Congratulations!”

The Bromley-based sensation, who reached the fourth round of Wimbledon last year, has said she will be ‘evaluating’ her options as she deals with her blisters. “It kind of showed up after yesterday’s match. We’ve been managing it but as you saw I couldn’t really move or load either way and now it’s just about trying to get it better as soon as possible,” Raducanu said on Saturday.

“It was compromising every shot I had to play. It’s very disappointing when you’re out there playing a rubber [game] for your country and you feel completely redundant. I’ve had a few blisters on my feet before. I’m going to need to go and evaluate all my options. This has happened quite a few times now and we need to nip it in the bud.

“Of course it’s frustrating but in some sort of twisted way it gives me a sense of confidence and relief that I don’t think it’s my tennis that’s the issue. As soon as I sort all of these out and keep building on my tennis level then I think I’ll be able to put out good matches back to back.”