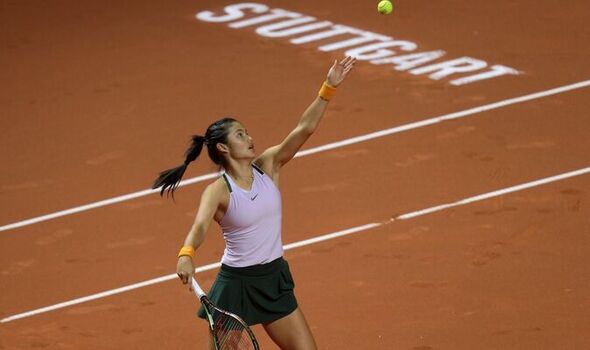 Emma Raducanu has admitted she didn’t know how to move on a clay court as little as a week ago as she now finds herself within one match of a showdown with world No 1 Iga Swiatek in Stuttgart. The US Open champion got off to a triumphant start at her first WTA tournament on the surface, dropping just three games in a 70 minute opening victory.

Raducanu has opened up on her lack of experience on the clay after adjusting to the surface perfectly in Stuttgart. The world No 12 needed 70 minutes to dispatch qualifier Storm Sanders 6-1 6-2 in her opening match at the Porsche Tennis Grand Prix and is now one win away from her first meeting with the world No 1.

Opening up on her rapid improvement on the dirt, the 19-year-old confessed: “This time last week I was practising in Prague and I genuinely didn’t know how to move. The fitness trainer was teaching me how to slide using a medicine ball. So I’m really pleased with how I’ve improved in a week.”

The US Open champion benefitted from playing her maiden Billie Jean King Cup tie on the clay over the weekend, when the Czech Republic narrowly edged Great Britain 3-2 in the qualifiers. Raducanu’s opening 7-5 7-5 win over Tereza Martincova on Friday was her first-ever professional match on the surface but things went south a day later as she suffered a right foot injury in her 6-1 6-1 loss to Marketa Vondrousova.

The Bromley local appeared to make a full recovery in time for Stuttgart as she got her best win yet by scoreline since becoming the surprise US Open champion back in September, and was happy with her ability to get the win quickly after being involved in some three-set slogs so far this season. “Getting the win in straight sets meant a lot because my recent matches have been very long three battles,” she said.

“As well, on a clay court against a tricky opponent who had two matches in qualifying. It’s definitely going to be memorable because it’s my first official win on clay.” And Raducanu will be hoping to continue finding herself playing memorable matches at the Porsche Tennis Grand Prix as a win over lucky loser Tamara Korpatsch on Thursday would allow her to face world No 1 Swiatek in the quarter-finals.

The Pole is on a 20 match-winning streak, spanning titles in Doha, Indian Wells and Miami, and a win for her country in her own BJK Cup tie over the weekend, and it would be the first time in Raducanu’s young career that she would face a world No 1. For now, the Brit is keen to keep improving on the surface and admitted it could one day become her favourite.

“Currently, well I love this court,” she laughed, confessing that clay was not yet her surface of choice. “I mean this court or probably up there with my favourites because it’s fast but you can slide on it and I love sliding but I think that right now [clay] it’s probably not my favourite at the top but it will one day be on par.”