A week originally designed to capitalise on the Raducanu factor has turned into the coming out ball for two unknown debutantes.

Great Britain will tackle Australia on Saturday as the accidental semi-finalists in the Billie Jean King Cup, having somehow survived into the last four of the premier team event in the women’s game.

Rather than the perpetually injured Raducanu being the focus in Glasgow, it has been Alicia Barnett and Olivia Nicholls. They are two graduates in their late twenties and barely known within tennis, let alone to the wider world. 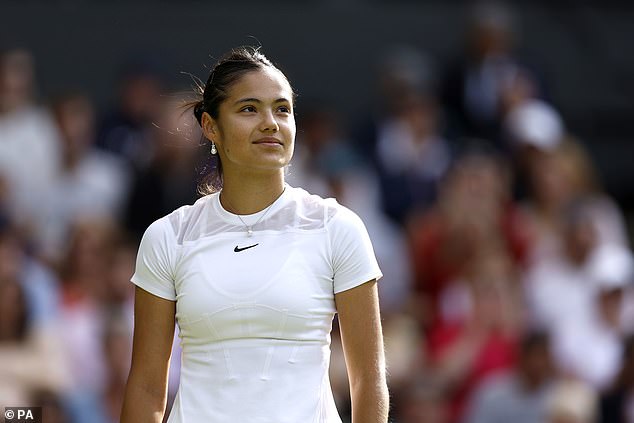 The unfashionable doubles specialists kept GB’s chances from the group stages with a key point against Kazakhstan. Then on Thursday night they clinched the final win in an unlikely 3-0 triumph over Spain.

In the parlance of this being a self-styled World Cup (of women’s tennis), the host nation went through on goal difference.

‘I’m not sure about miracles or anything, but I thought we just seized every moment we could and enjoyed every moment,’ said Barnett.

She and Nicholls were a late pick by Captain Anne Keothavong after enjoying a solid year that has seen them move into the top 70 of the world doubles rankings. 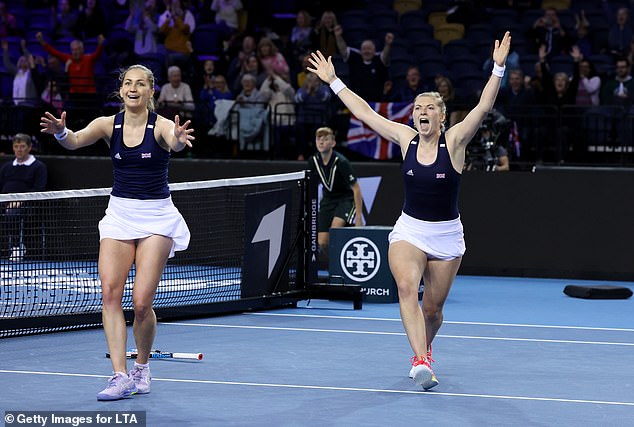 Their prominent role adds to the slight air of unreality already created by the fact that GB are fortunate to be at this stage at all.

In April they were knocked out of the qualifying round for this week’s finals event when beaten by the formidable Czech Republic.

However, with the global circuit in recovery mode from two years of Covid disruption a venue had yet to be designated for the 12-nation climax to this competition.

The Lawn Tennis Association, cushioned as ever by the millions flowing from Wimbledon, stepped into the breach with Glasgow’s Emirates Arena being available at relatively short notice.

The quid pro quo for an inevitable financial loss was a wildcard being given to the host nation, and now they have unexpectedly edged through from their group.

On Saturday morning they will tackle Australia, who feature former US Open champion Sam Stosur and Ajla Tomljanovic, who in New York this year ended the career of Serena Williams. 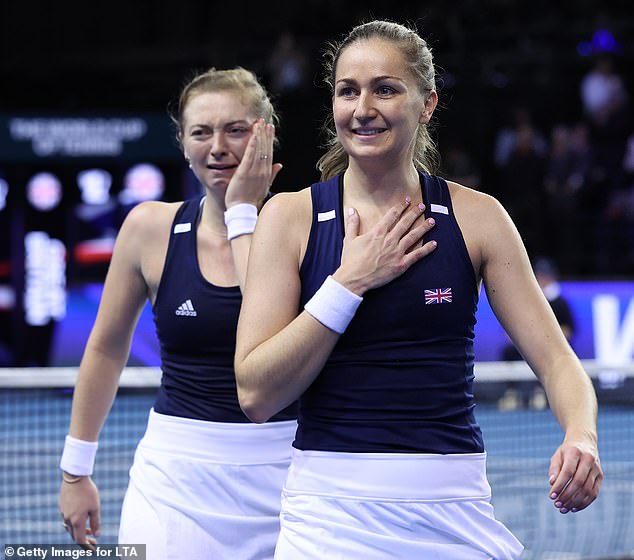 Harriet Dart and Heather Watson will play singles, backed up by Barnett and Nicholls, who have a strong mutual understanding moulded by years flogging away in the shadows.

‘We are both great examples that you don’t have to go pro at the age of 16 or 17,’ said Nicholls. ‘I didn’t start my professional career until I finished university.

‘Lissy, the same. I went to Loughborough. She went to American university. We were fresh, ready to go. Maybe some people, when they go out to start their professional careers when they are young, they might get burnt out at the age of 23. It shows both pathways, you can go on to do great things.

‘We weren’t the best juniors ever, but we love tennis and we just kept plugging on,’ added Barnett. ‘I hope that this is an example for like the younger generation.’

There was added poignancy for Barnett, whose father is President of Painswick Tennis Club in her native Gloucestershire.

‘My dad drove up this week to be here, he’s actually come up alone. I lost my Mum a few years back but I think she would have actually loved this. It’s just been amazing.’ 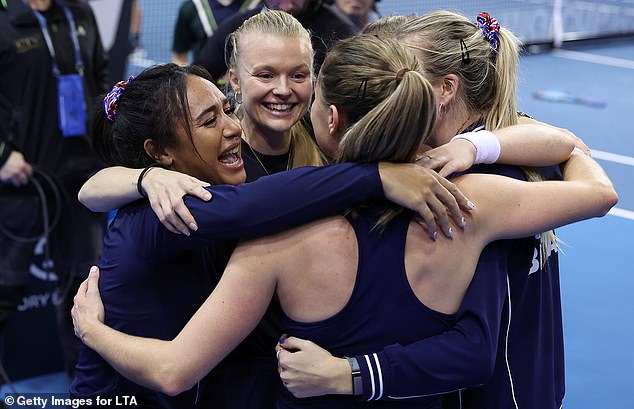 Harriet Dart and Heather Watson will play singles, backed up by Barnett and Nicholls, who have a strong mutual understanding moulded by years flogging away in the shadows

It has been a strong effort from a very united GB team, coming seven weeks after the significant disappointment at the same venue, when doubles defeats saw the Davis Cup team fail to make the finals.

By contrast the women are into the last four of the competition formerly known as the Fed Cup. The last time that happened was when Sue Barker and Virginia Wade carried them there in 1981.

If it comes down to the doubles again on Saturday, Barnett and Nicholls will have their work cut out against the veteran Stosur and current world number ten in the two-woman code, Storm Sanders.

‘I think we have got, we certainly have a great chance but we have been watching Sanders playing really well at number two,’ said Keothavong. ‘I think she’s probably been the standout for the Aussies. They are a tough team with plenty of experience in this competition.’

The other semi-final will be between Switzerland and the winners of last night’s match featuring the Czech Republic and USA.

GB v Australia, 10am (BT Sport and BBC2). Expected line up: Watson vs Sanders, Dart vs Tomljanovic, Barnett and Nicholls vs Sanders and Stosur