After serving for the match against Daniil Medvedev, Rafael Nadal fell by the wayside again at the ATP Finals… so, after 10 attempts and zero titles, does the Spaniard’s lack of indoor success make a difference in the race to become men’s tennis GOAT?

As his final forehand – that usually irrepressible whip of the left arm – limply hit the tape and landed on his side of the court match point down, Rafael Nadal’s luck was out once again at the O2 Arena.

It remains his black mark. Whilst 86 career titles, 20 Grand Slams and one Olympic gold medal make the Spaniard an irrefutable all-time great, his peculiarly lacklustre displays at the end-of-season championships continue to be a thorn in his side.

Even serving for a place in the final against Daniil Medvedev on Saturday night, assuredness did not engulf the empty stadium. Not like it would on the clay of Philippe Chatrier, that’s for sure. Nadal was stunningly broken to love on an indoor hard surface which – after 10 appearances at this event – he is still yet to master. 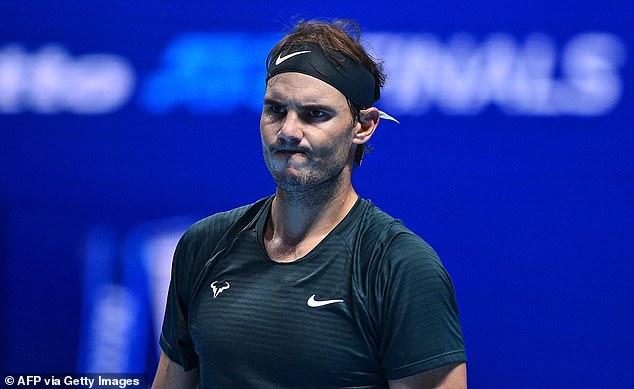 Rafael Nadal again came up short in the ATP Finals, losing his semi-final on Saturday night 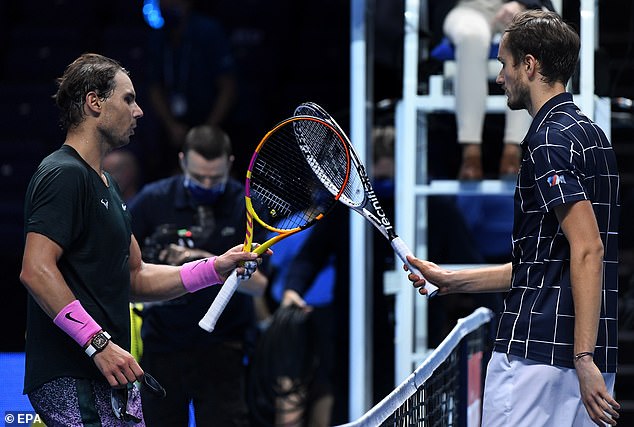 After ultimately going down 3-6, 7-6(4), 6-3, you have to wonder if this time round he has blown his best opportunity. After all, there was no five-time champion Novak Djokovic lying in wait tonight, rather Dominic Thiem after his epic win earlier in the day.

Why then, amongst 15 years of unparalleled success in an era riddled with the three best players men’s tennis has ever seen, is Nadal so suspect, so penetrable, even vulnerable, at this tournament?

Often, it’s been fatigue. He usually flies over to London exhausted after a gruelling season scattered across the globe, at the end of a five-month period away from the beloved red stuff he so thrives on. 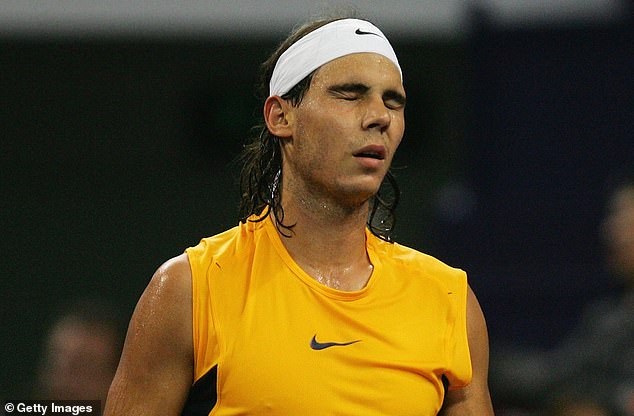 Dating back to his first season-ending finals appearance in 2006, Nadal has not won the title

He has only won one title on indoor hard, and that was back in 2005. And though he has qualified 15 times for the year-end championships, he has withdrawn on six occasions, making just one final in 2010 where he fell just short against Roger Federer.

But tiredness was no excuse this year, after a shortened calendar like no other. In fact, after wiping away the opposition without dropping a set at the French Open last month and with Federer absent, this was very much Nadal’s golden opening.

Yet as highlighted this week, a bigger factor is the way in which his game stands up in sheltered conditions, as Greg Rusedski explains.

‘His game doesn’t lie up perfectly indoors – his returns can be a little short, guys can step on it,’ the former British No 1 tells Sportsmail.

‘The court doesn’t really help him with the bounce as it doesn’t get high enough for him to use his main strengths on the court and generally, he just doesn’t serve well enough. 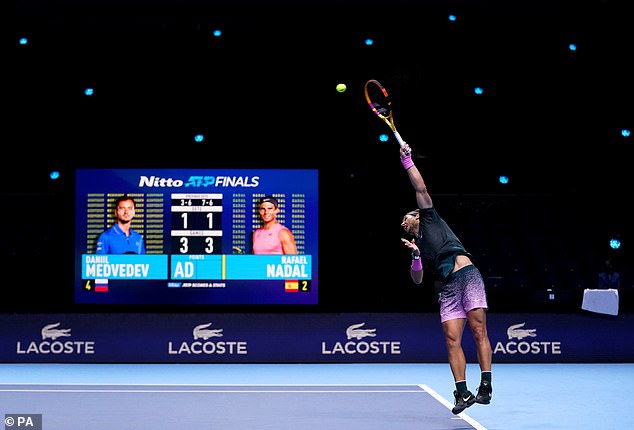 ‘Conditions simply don’t suit his game – even though he has been close to winning it a decade ago.’

Don’t accuse him of not trying tactics out of the ordinary to compensate though. Against Medvedev, he slowed the pace of the game down with a constant stream of backhand-slices, which undoubtedly unsettled his opponent early on. It almost squeezed him over the finish line.

Yet even break point down in the deciding-set, Nadal persevered with his backhand-slice gameplan. Two-and-a-half hours in though, the Russian was well-tuned by now and decisively concluded the point at the net. As Mark Petchey on commentary noted: ‘For the first time he does look a little bereft of ideas.’

Let’s face it, Nadal is not a million miles away. In the group-stage loss to Thiem, he squandered openings in two tie-break sets. Last night, he was on the cusp of a second-ever final at this event.

But in juxtaposition to his domineering aura on key points in just about any conditions outdoors, he seemed fragile this week as he allowed tonight’s finalists to dictate rallies to their own tempo. 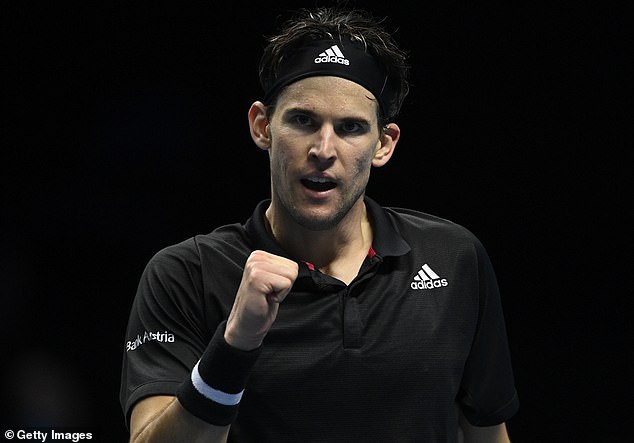 The man himself said pre-tournament that his failure at the Finals was not something that keeps him awake at night. And why should it, given the riches accomplished in just about every other aspect of his career.

But no doubt, deep down, it’ll be an irritation, a fly which continues to itch come November time. By the time the ATP Finals extravaganza rolls on to Turin next year, Nadal will be 35. No player has ever won this event over the age of 30.

Roger Federer has shown that age is no barrier but with the next generation finally finding their feet on the main stage, has Nadal seen his chances of a perfect career fall by the wayside?

In all likelihood, probably. But, in the grand scheme of things, does his record indoors actually matter? Should we care? Should he care?

Even amongst his fellow behemoths, there are gaps in the resume. Both Federer and Djokovic are yet to win singles gold at the Olympics while Andy Murray – if you briefly make this a top-four conversation – has not tasted major success in France or Australia. 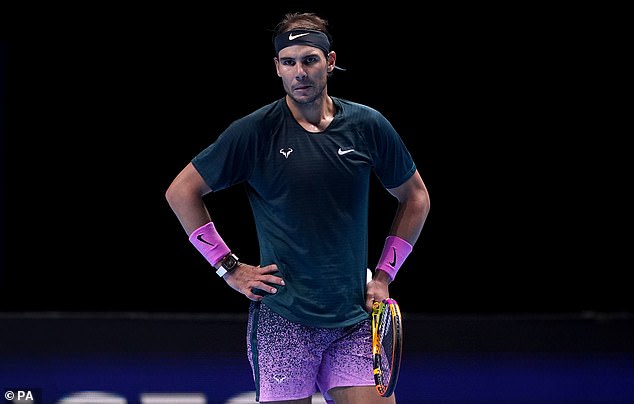 Yet they’ve all won the end-of-year finals, in a unique round-robin format pitting the best-against-the-best, match-after-match. No early-round warm-ups to find your rhythm here – hit top-form from the get-go, or pack your bags.

Whether Nadal is overly concerned or not, the autumn exasperation goes on and he will be a spectator as the season reaches its finale tonight.

But in GOAT-related conversations against Federer which is neck-and-neck with Djokovic lingering on the coattails, when it’s all said and done it’ll be the littlest of blots which will trigger a twitch of the eye.