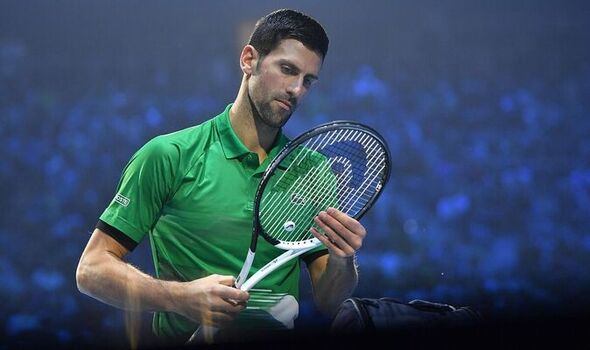 Novak Djokovic is officially set to miss out on playing the inaugural United Cup as Serbia failed to claim one of the last two spots in the draw for the new mixed-gender tournament. The world No 5 recently had his ban on entering Australia lifted meaning he can compete in the country next season but will be left out of the first event of 2023 after his country failed to qualify.

Djokovic is already an early favourite to win January’s Australian Open after having his ban from the country overturned and ending 2022 by lifting a record-equalling sixth ATP Finals trophy. But the world No 5 will be forced to miss the new tournament being staged Down Under in the build up to the first Major of 2023 after his country failed to qualify for the United Cup.

The mixed-gender tournament will see 18 nations face off in five groups of three across Sydney, Brisbane and Perth from December 29, with the top four countries playing a knockout stage in Sydney from January 6 to 8. The competing countries have been picked based on the top six ATP rankings, the top six WTA rankings and the top six of a combined ranking.

When the draw was made earlier this month, two final nations were yet to be determined with the ATP season still ongoing, but the sixth ATP ranked country and sixth combined ranked country have both now been determined following the conclusion of the ATP Finals, with the tournament champion Djokovic failing to give Serbia enough of a boost to qualify.

Instead, Bulgaria and Kazakhstan have been confirmed as the last two nations to make it into the draw, joining Argentina, Belgium, Brazil, Croatia, the Czech Republic, France, Germany, Great Britain, Greece, Italy, Norway, Poland, Spain, Switzerland and the United States. ATP world No 28 Grigor Dimitrov will lead Bulgaria, which has been drawn into Group A to face France and Greece in Perth.

The former world No 3 will be joined by world No 195 Dimitar Kuzmanov and No 207 Adrian Andreev as well the WTA’s No 90 Viktoriya Tomova and world No 286 Isabella Shinikova. Meanwhile, Kazakhstan will join Group B in Brisbane, where they will face Poland and Switzerland.

The nation boasts strong players on both tours, with world No 37 Alexander Bublik on the men’s tour and this year’s Wimbledon champion Elena Rybakina on the women’s tour. However, it was reported that the WTA No 22 reportedly did not enter the tournament so world No 52 Yulia Putintseva could be the team’s top female player instead.

With only one Serbian player in the WTA’s top 100 – Aleksandra Krunic ranked at No 100 exactly – the country has been unable to qualify despite having four men in the ATP top 100, including Djokovic at world No 5. As well as Serbia, Canada is one of the strong tennis nations that is notably missing from the draw, as the country boasts two top 20 male players and three women in the top 70.