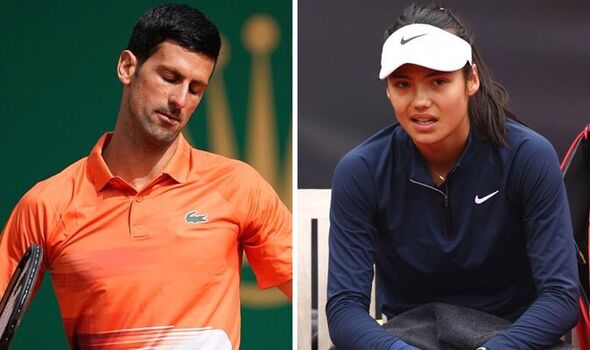 The clay season kicked off last week with the Monte Carlo Masters, which also saw the short-lived return of Novak Djokovic before the world No 1 crashed out in his opening round to Alejandro Davidovich Fokina, who went on to make his maiden tour final. It was Stefanos Tsitsipas who took home the trophy, joining an elusive list of players to defend their Monte Carlo title and maiden Masters title.

Emma Raducanu was also back in action, making her professional debut on clay and her Billie Jean King Cup debut simultaneously. While it was a successful first match for the world No 12, she was struck by blistering in her second match and left feeling “helpless” as Great Britain narrowly lost their qualifier tie 3-2 to the Czech Republic, though Raducanu is already set to be back in action this week in Stuttgart.

Roger Federer and Rafael Nadal have also shared some positive injury updates in the last week, both back in training. The 40-year-old Swiss has been posting footage from his sessions in the gym as he works towards a comeback from his third knee surgery, while the Spaniard was back on a tennis court for the first time in a month after picking up a rib injury in Indian Wells.

Express Sport takes a look at the biggest stories from on and off the tennis court over the last week.

Djokovic made his long-awaited return in Monte Carlo last week, in what was just his second tournament of the year after his unvaccinated status had kept him out of several events, with his only prior result a quarter-final showing in Dubai where he lost to qualifier Jiri Vesely. The Serb’s comeback was short-lived as he received a bye to the second round and lost to then-world No 46 Alejandro Davidovich Fokina 6-3 6-7(5) 6-1.

Speaking about his early exit, the two-time former champion in Monte Carlo said: “Physically I completely collapsed. I couldn’t move any more. I didn’t like the way I felt in the end. I need to talk with my team. He was the better player. I was hanging on the ropes the entire match. I just ran out of gas completely. If you can’t stay in the rally, not feeling your legs on the clay, it’s mission impossible.”

The 20-time Major champion is now back in action in this week’s Serbia Open, held in his own Novak Tennis Centre in Belgrade where his brother Djordje is the tournament director. He faces the winner of a clash between his two countrymen Laslo Djere and Hamad Medjedovic in his first match and has opened up on his aims for the week after a slow start to his clay season in Monaco. “I was not fully ready for the tournament in Monte Carlo and I knew that before the tournament started,” he said. “However, I need match practice and this is the surface (clay) that requires a lot of time spent on the court during training sessions, and even more during matches. I hope to play more matches in Belgrade than in Monte Carlo.”

JUST IN: Emma Raducanu explains why she wore Tottenham shirt in practice

Raducanu experienced two career firsts over the weekend, representing Great Britain in the Billie Jean King Cup for the first time and making her professional debut on a clay court. She clinched a crucial point for her team against Tereza Martincova on Saturday, winning 7-5 7-5 after Harriet Dart lost the first match of the tie. But it was a reversal of fortune on day two as the 19-year-old suffered a 6-1 6-1 loss to Marketa Vondrousova after picking up a right foot injury that saw her require an off-court medical time out, and she was later forced to bathe her feet in “surgical spirit” after suffering with severe blistering.

Great Britain went on to lose the qualifier tie 3-2 as Dart clinched her first-ever BJK Cup singles win to keep the team alive before Dart and Katie Swan fell to Vondrousova and Karolina Muchova in the decisive doubles. As for Raducanu, her latest injury woes hopefully seem to be behind her as she is in Stuttgart ready to compete in the Porsche Tennis Grand Prix, her first WTA Tour clay event.

She faces qualifier Storm Sanders in the opening round on Wednesday and is in the same quarter as world No 1 Iga Swiatek, who is on a 19 match-winning streak spanning three consecutive WTA 1000 titles in Doha, Indian Wells and Miami, and her BJK Cup tie for Poland over the weekend.

Federer and Nadal both took to social media over the last week to share positive news about their respective comebacks from injury. The Swiss star has played just five tournaments in the last 26 months after undergoing double knee surgery in 2020 and suffered a “setback” in his comeback last year, going under the knife for a third time.

He has finally been able to return to a more intense training plan, sharing photos and videos from his practice sessions in the gym where he can be seen working on his footwork and strokes, replicating forehand and backhand motions with a pole, saying rehab was “rockinggggggg”. Meanwhile, Nadal shared an update on Easter Monday as he returned to the practice court for the first time in four weeks, since he picked up a stress fracture in his rib during his Indian Wells semi-final.

The world No 4 was forced to withdraw from this week’s Barcelona Open as his team admitted last week they were unsure where he would make his comeback but there has finally been some progress for the ‘King of Clay’ as he wrote: “Today after 4 weeks without stepping on a tennis court, first light training”.

Tsitsipas became the sixth man in history to successfully defend his title at the Monte Carlo Masters and the fourth-ever to defend his maiden Masters 1000 title when he defeated Davidovich Fokina 6-3 7-6(3) in Sunday’s championship match. He joined Ilie Nastase, Bjorn Borg, Thomas Muster, Juan Carlos Ferrero and Nadal as the only men to have won back-to-back titles in the principality, and followed Boris Becker, Lleyton Hewitt and Nadal as the only players to defend their first-ever Masters titles.

Following his run to the trophy which saw him beat the likes of 2019 champion Fabio Fognini, Diego Schwartzman and Alexander Zverev, the Greek was tipped as one of the four “favourites” to win the upcoming French Open, where he reached his maiden Grand Slam final last year. “In a great position to have another great run at the French Open. It puts him in the list of four guys who you think have a real shot to win it with Rafa, Novak and Alcaraz,” former world No 4 Greg Rusedski told Amazon Prime after the match.