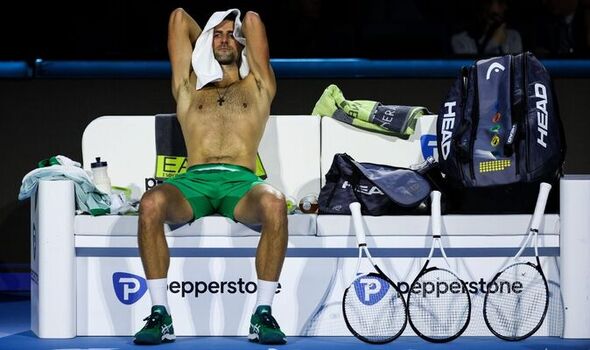 Novak Djokovic has explained why he refused to retire his ATP Finals match to Daniil Medvedev on Friday after he was seen violently shaking following the second set tiebreak. The match was a dead rubber with Djokovic already through to the semi-final and Medvedev eliminated but the world No 8 fought until the last point and ended up winning despite calls for him to retire and save himself for tomorrow’s match.

Djokovic produced arguably one of most bizarre victories of his career as he survived a physical scare to outlast Medvedev 6-3 6-7(5) 7-6(2) in what became his longest-ever match at the ATP Finals at three hours and 11 minutes. The 35-year-old looked down-and-out when he lost the second set as he was doubled over at his bench during the tiebreak and could be seen shaking during the changeover once the set came to an end, with his playing hand trembling violently as he wiped his face with a towel.

Fans and pundits questioned why the five-time ATP Finals champion wasn’t retiring the match when he had a semi-final to play less than 24 hours later and had already safely won the Red Group, and Djokovic explained his decision after the match. “I had a day off between the first two matches always, so I felt fresh coming into the match.” he said.

“But as you always are, I was a bit more nervous and tense coming into the match against one of the top players of the world, top rivals, that Medvedev is for me in the last several years. You want to win regardless of the qualification that I already have, the elimination he has before the match. It doesn’t matter.”

While the match had no effect on the outcome of the group standings, Djokovic said he was unable to approach the match in any way other than wanting to win it as he continued: “We always want to win against each other regardless of where we play each against other. I think the match today was a showcase of those mentalities that we both possess.

“Of course, he wanted to finish a season with a win, and on the other hand I didn’t want to lose to him. I can’t calculate, I don’t like to calculate, never did that. My mentality is to win every match that I play in the present moment. Again, this stage of my career, every match like this is a golden opportunity for me to grab a win against one of the top guys of the world.”

And the seventh seed in Turin said he wasn’t thinking about his semi-final while others had been concerned with what his physical struggles could mean ahead of Saturday’s clash with Taylor Fritz, as he explained that he saw his problems as more of a mental battle. “Without a doubt I went to the court in a state, throughout the entire match, with this kind of mentality that I want to win, not thinking about what’s coming tomorrow,” Djokovic explained

The Serb was also asked how the sport’s great champions like himself and Rafael Nadal knew their limits after coming back to win matches when they looked on the brink of collapse and where the limit was, and he responded: “I don’t think that a limit exists. It’s really in your head. It’s really about perspective and approach and your perception of how you see things in that given moment. Of course, when you’re going through physical struggles, it affects the game, it affects how you feel mentally, it affects your body language. Of course, the opponent likes seeing you down, and he’s trying to dominate in the rallies, he’s trying to get the upper hand of the match, which was kind of the situation that was happening today.

“But I think the biggest battle, as I’ve said before, is always the inner battle. If you manage to find yourself in that optimal state of mind and body as often as you possibly can, I feel you can extract the best and reap the best results for yourself in every moment, every point, every match.”