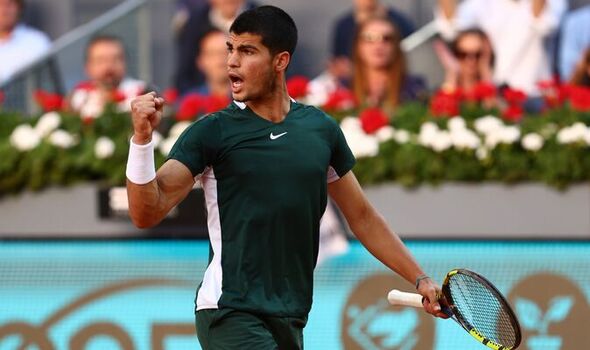 Carlos Alcaraz has been crowned the Madrid Open champion with a dominant 6-3 6-1 victory over last year’s winner Alexander Zverev in just 62 minutes. It means the teenager has now defeated the top three seeds back-to-back-to-back after posting wins over Novak Djokovic and Rafael Nadal en route to the final. It’s a fifth title for the world No 9 and a second as Masters 1000 level.

It was a third meeting between defending champion Zverev and seventh seed Alcaraz, but their first since the young Spaniard had become one of the biggest new names in the sport with three title wins and a top 10 debut this year. The German won the first battle of the coin toss, electing to receive, but that was to be his only win in the final.

The defending champion was almost immediately threatened on his serve, fending off a break point at 1-2 down to remain on serve before getting broke in his very next sevice game as the crowd erupted into chants of “Carlos” as their man took a 4-2 lead. The seventh seed served out the first set 6-3 to love as the world No 3 looked a shell of his usual self, struggling to find answers for everything the Spaniard threw his way.

He managed to hold on in his opening game of the second set but that was the final game he won in the championship match, as Alcaraz served up a moral bagel by breaking the Olympic champion’s serve three times to close out a 6-3 6-1 win in just over an hour.

JUST IN: Boris Becker ‘moans about prison food’ after being served corned beef