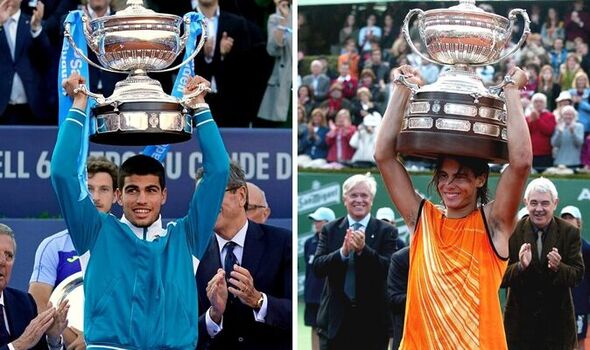 Carlos Alcaraz has been told to “focus on himself” amid multiple warnings over the comparisons people have drawn between the 18-year-old and Rafael Nadal. Both Alcaraz’s coach Juan Carlos Ferrero and former world No 2 Alex Corretja have encouraged the world No 11 to “keep his own way”.

Alcaraz cracked the top 10 after his run to the title in Barcelona, aged just 18. His achievements further fuelled the constant comparisons between him and Nadal, as he lifted the Barcelona Open title on April 24 2022 and made his top 10 debut on April 25, exactly 17 years to the day after an 18-year-old Nadal won the first of his 12 Barcelona titles on April 24 2005 and reached the top 10 a day later.

But the new world No 9 has admitted that his coach, another Spanish former world No 1 in Juan Carlos Ferrero, didn’t like the comparisons. “He wants me to focus on myself, on Carlos Alcaraz, and not try to be someone else. That advice helped me a lot,” the recent Barcelona Open champion told Eurosport.

And another retired Spaniard, former world No 2 Corretja, has also warned the teenager of the dangers of getting sucked into his likeness with Nadal. “We all know that the comparison between Nadal and Alcaraz will exist. I think the most important thing for Carlos is just to stay away from that,” he told Eurosport.

“He just needs to keep on his own way. It is normal to compare situations and rankings and results because if you become top 10 in the same day, after winning the same tournament, being Spanish, it’s a big coincidence.” The two-time French Open finalist also admitted he believed Alcaraz would go on to exceed the careers of himself and his fellow retired Spaniards but questioned whether the 18-year-old could reach the same heights as Nadal.

Corretja continued: “It’s like the karma of life, and something big is going to happen. I’m sure that he will overcome our careers, the ones that are not Rafa’s. Rafa is another step, it’s another dimension, it’s something different. So, we leave that apart for the moment.”

But the retired pro predicted big things for Alcaraz, expecting him to next go on to reach world No 1 and become a Grand Slam champion. “I’m 100% sure that he will become No 1 in the world, that he will win a Slam and destroy all our records,” he added.

“When he’s talking after the matches, you can see he has so much confidence and believes he can beat anybody in the world. It doesn’t matter about the surface or the tournament. That’s very important if you want to become one of the greatest.”