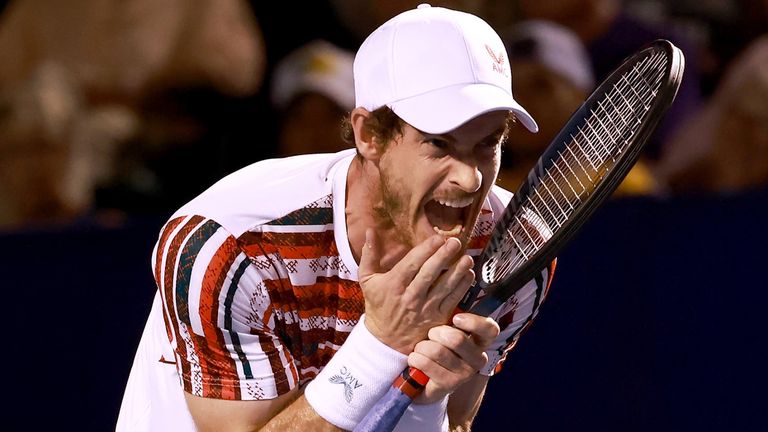 Andy Murray suffered a disappointing exit at the Winston-Salem Open at the hands of Frances Tiafoe, but Dan Evans came from a set down to reach the third round.

Murray, who has dropped nine places to world No 114 in the latest rankings, came close to wrapping up the first set in the 10th game but failed to convert three break points.

Gentlemen and warriors and world-class humans.
Thanks for a great night @andy_murray and @FTiafoe.

A solitary break in the tie-break was enough for Tiafoe to take the first set.

Murray lost two straight service games as Tiafoe opened up a 5-1 lead in the second set, but he broke straight back to reduce the deficit.

However, Tiafoe served out for the match in one hour and 50 minutes in hot and humid conditions to reach the last 16.

We have the remedy to whatever ails you.

It's your pal @andy_murray with "Dad Jokes." 🤣
Ladies and Gents, please let's give our new friend Andy a round of applause.

He'll be here all week, and don't forget to tip your "server." 🍸 🎾 pic.twitter.com/DUFstE53iS

Former world No 1 Murray will now heads to the US Open, where he won the first of his three Grand Slam titles in 2012.

“The positive thing is that I moved well and served well but my level is up and down with no real consistency,” Murray said. “There are moments in matches where I play well and then I make mistakes or miss returns. I wish I wasn’t doing that.

“My level is around 50 or 60 in the world. It’s frustrating because if wasn’t moving great and not feeling good physically then I would be a bit easier on myself. But when I’m winning a low percentage of second-serve points, that’s got nothing to do with the physical side of things.”

[email protected] is back practicing on the court where it all began. 🤩 pic.twitter.com/Nby0aQph8x

Evans, ranked more than 100 places higher than his opponent, lost the opening set before turning the match around to set up a date with 14th seed Richard Gasquet. Britons Francesca Jones and Samantha Murray moved a step closer to the main draw of the US Open after winning their opening qualifying matches.

Both will have to win two more games to take one of the qualifying spots, with Emma Raducanu, Katie Boulter, Harriet Dart and Jodie Burrage set to start their campaign on Wednesday.

In the men’s qualifying, Liam Broady will take on Tatsuma Ito in his first qualifying round.