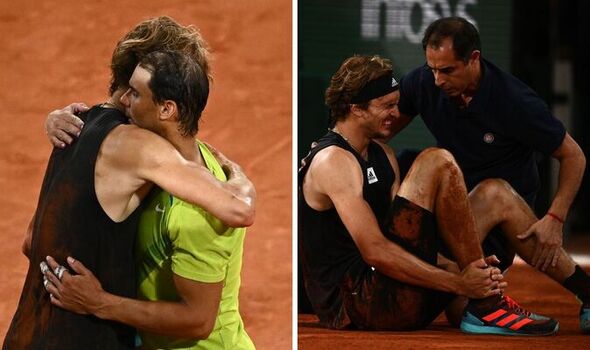 Alexander Zverev’s brother Mischa has thanked Rafael Nadal for how he handled the third seed’s freak injury retirement during their French Open semi-final clash. The 25-year-old fell on his ankle and was taken off court in a wheelchair before re-emerging on crutches to retire.

Zverev retired after three hours on court when he fell on his ankle and was taken off court in a wheelchair. Nadal went off-court with his before the pair re-emerged to shake hands and paid tribute to the third seed in his in-court interview.

After the German’s freak injury retirement, his brother has thanked the 13-time champion for helping Zverev during the difficult scenes. “Rafa is a special person,” Mischa Zverev told Eurosport. “He can feel it and he understands it. It helps Sascha when Rafa talks to him.”

The Spaniard – who turned 36 today – has struggled with injury himself in the last three months, fracturing his rib in Indian Wells before his chronic foot injury came back to haunt him at the recent Rome Masters. And the elder Zverev brother said it was “important” for the world No 3 to hear from someone who had struggled in the past.

JUST IN: Wimbledon ban divides tennis fans after Djokovic and Nadal speak out