World No.1 Novak Djokovic has reportedly written to Australian Open tournament director Craig Tiley asking, among other demands, for players in hard lockdown to be released early from hotel quarantine and for as many as possible to be moved to private houses with tennis courts to prepare for the Open.

Spanish tennis website Punto de Break reported that Djokovic, who is one of several stars serving their quarantine in Adelaide ahead of an exhibition tournament there, had asked Tiley for more support for players who had been forced into hard lockdown because people on their charter flights to Australia had tested positive for COVID-19. 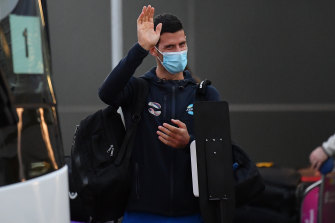 Novak Djokovic waves as he arrives at Adelaide Airport on Thursday. Credit:Getty Images

There are now 72 players in isolation after a person on a third flight into Melbourne returned a positive test. The strict lockdown prompted a wave of anger from players, some of whom claimed they had not been told a positive test on a plane would force all passengers on that plane to be confined to their rooms for 14 days, unable to train.

The letter reportedly called for Tennis Australia to provide more fitness and training equpiment in players' hotel rooms and better food "according to the level of the tournament and [for] an elite athlete", and for the 72 players in hard lockdown to be released early if they returned extra negative tests.

Other requests, according to the report, included:

Victorian Premier Daniel Andrews said on Monday morning: "the rules will not be changing, because the public health advice is where those rules came from".

"People are free to provide lists of demands, but the answer is no," he said.

A spokesman for COVID-19 Quarantine Victoria said the head of the organisation, Emma Cassar, would not be considering allowing players any of the requests made by Djokovic.

When asked on Melbourne radio station 3AW if Victoria would allow players to see their coaches face-to-face or let them train at private properties with tennis courts, Cassar said: "absolutely not".

"We're not modifying the program," she said. "We understand the 14 days is really tough … but we're not taking risks on community safety.

"That's a definite no from me," she said when asked if the players could leave quarantine early.

"They've got phones, they've got technology where they can do that now, because again that's the safest way for them to do those coaching sessions and we've all learnt to live with this pandemic in a virtual sense. It's about keeping them safe and their coaches safe."

Cassar was asked if she would consider releasing players early from isolation if they returned negative COVID tests. "Still no … [we're] absolutely not modifying the program," she said.

Cassar said just under 1000 players and their support staff would be quarantining in Melbourne in total, adding that authorities had worked closely with Tennis Australia to provide extra gym equipment to the players in isolation.

WHAT WE KNOW SO FAR: AUSTRALIAN OPEN QUARANTINE

Djokovic is the former head of the ATP player council and is currently head of a breakaway player's union, the Professional Tennis Players Association.

Other players based in Adelaide include Rafael Nadal, Serena Williams and Naomi Osaka. There has been some angst directed at officials over the apparently superior accommodation and facilities in Adelaide, where it has been reported players have access to a gym at their hotel and can take their whole staff to the practise courts.

In June, Djokovic tested positive for COVID-19 after hosting an exhibition tour in the Balkan region, and was criticised for bringing players in for the event, without sufficient social distancing measures, in the midst of the pandemic.

In New York, some players were allowed to rent private accommodation at their own expense for the US Open, but at the French Open in Paris all players had to stay in the designated "bubble" hotel.

Comment is being sought from Djokovic and Tennis Australia.