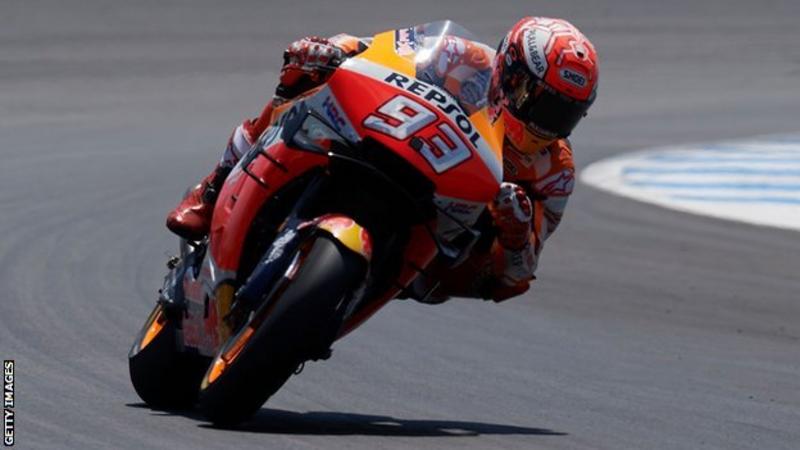 The Spanish Grand Prix has become the fifth race of the MotoGP season to be postponed because of coronavirus.

The race in Jerez was intended to be the start of the MotoGP season following the cancellation of the original season opener in Qatar.

Races in Thailand, the United States and Argentina have also been postponed.

Organisers said a new date for the Spanish race could not be confirmed until the worldwide coronavirus situation became clearer.

They added that a revised calendar would be published as soon as it was available.

‘Collapsed in eight fatal minutes’: Spanish press claim Real Madrid need a ‘miracle’ at the Etihad after falling to defeat against Manchester City

Real Madrid have been accused of collapsing by the Spanish press following their dramatic 2-1 defeat against Manchester City in the Champions League.

Gabriel Jesus and Kevin De Bruyne turned the game on its head after Isco netted the opener for the hosts in the 60th minute, leaving Madrid with it all to do at the Etihad in the second leg of their last-16 Champions League tie.

The La Liga giants will now also be without captain Sergio Ramos following his straight red card for tripping up Jesus through on goal right at the death. 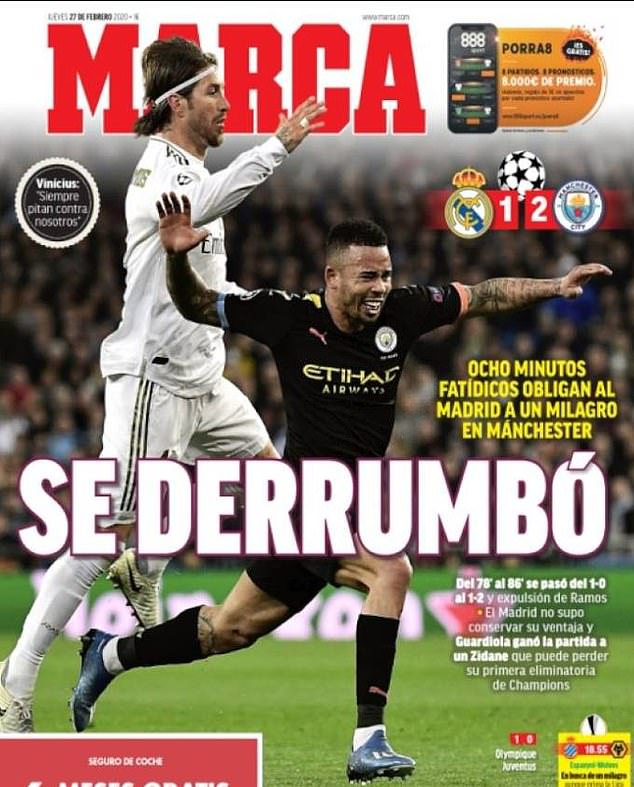 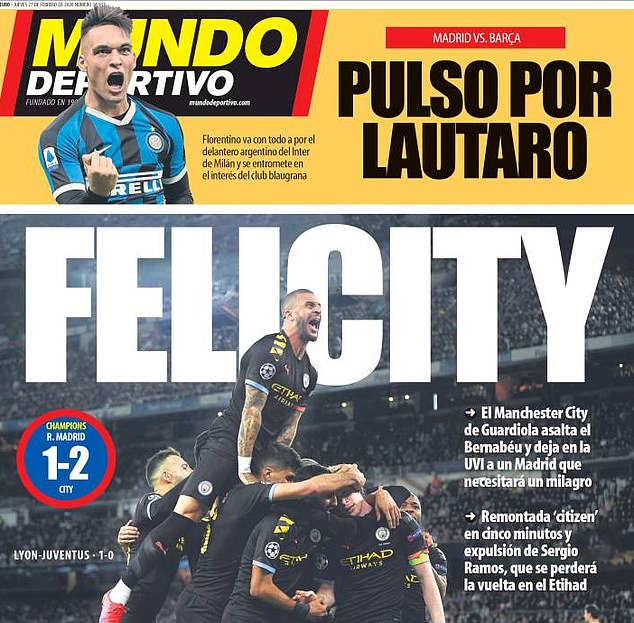 And now following City’s late comeback at the Bernabeu, the Spanish media have given their hard-hitting reaction to the Champions League clash.

On Marca’s front page, they have led with the headline: ‘Collapsed’, before claiming Madrid need a miracle in Manchester after a fatal eight minutes at the Bernabeu.

The fatal spell saw Jesus level the scoring in the 78th minute before De Bruyne clinched the win five minutes later prior to Ramos received his marching orders in the 86th minute.

Meanwhile, Mundo Deportivo ran with the headline: ‘FELICITY’, which translates in English to ‘Happy City’ after their comeback victory in the Spanish capital.

Just like Marca, they insist Zinedine Zidane’s side need a miracle if they want to progress to the quarter finals. 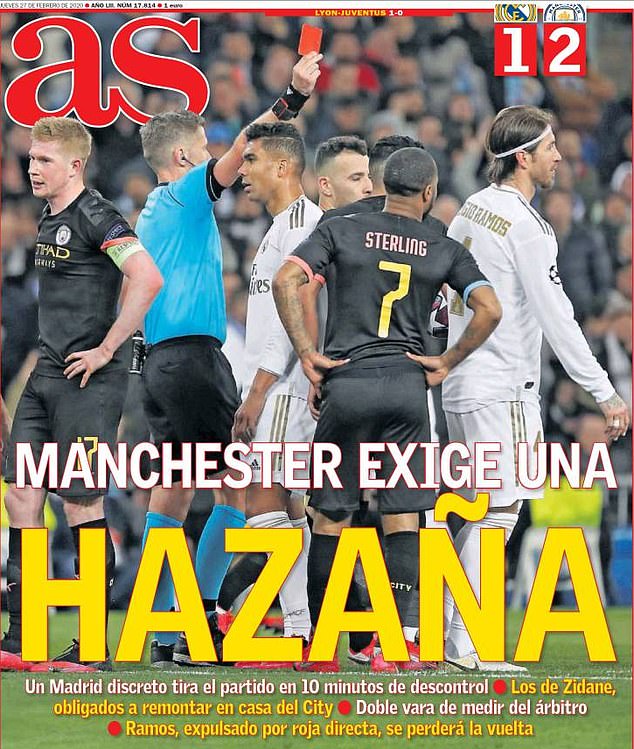 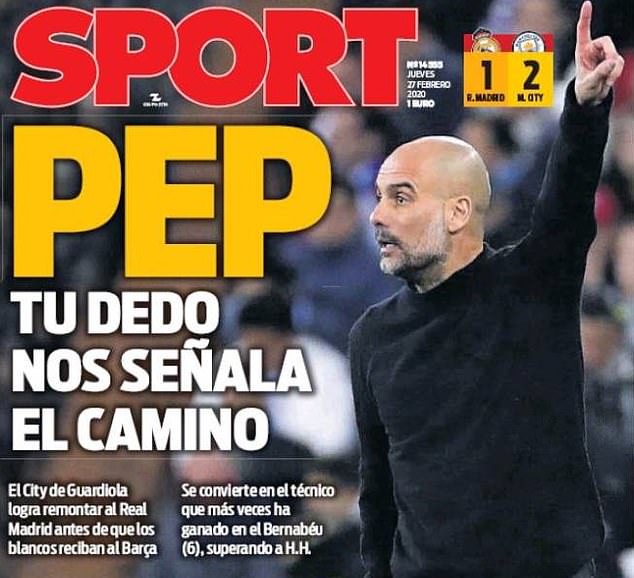 Furthermore, Spanish paper AS led off the claim that Madrid need to produce a heroic performance in Manchester before admitting they lost control of the game over a 10-minute spell at the end.

And finally, Sport ran with a slightly different theme by publishing a picture of City manager Pep Guardiola after masterminding the victory, alongside the headline: ‘Pep your finger shows us the way.’

The Spanish papers’ analysis echoes what Madrid midfielder Casemiro said after the final whistle on Wednesday night – the Brazilian claimed his side had no intensity late on.

‘The explanation is obvious,’ he told television channel Movistar when asked to analyse the defeat. 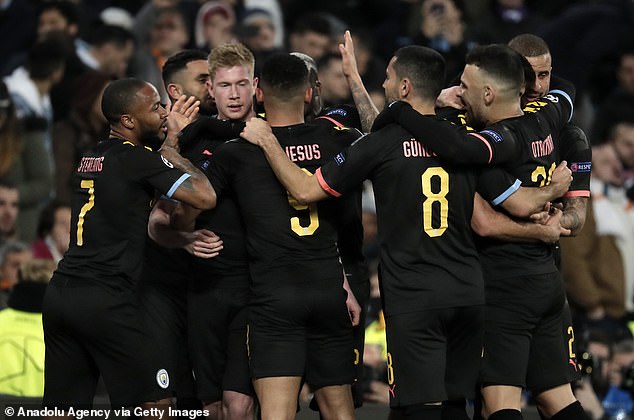 ‘We did 75 minutes really well and then we didn’t have any intensity, we lost control of the game, we sat back and they are a great rival, they attacked twice and scored.

‘There’s no excuse. At the weekend we’ve got a tough game against Barcelona. We need to start thinking about that.’

When asked about the second leg, Casemiro continued: ‘If there’s one team capable of turning this around it’s Real Madrid.

‘But I think what’s important is that we played really well for 75 minutes, against a great side, and for 15 minutes we didn’t do what we had to. And they came back to win. 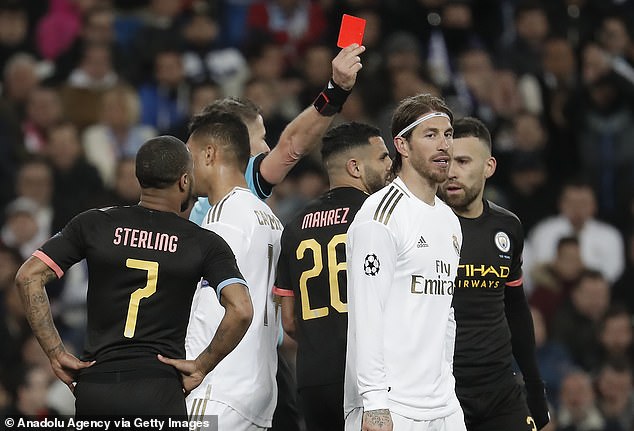