Home » Sports News » Your complete guide to the Melbourne Cup

This year’s Melbourne Cup, like last year, is heavily overshadowed by the coronavirus pandemic. But unlike last year there will be crowds and BBQs and more of a sense of freedom.

Below is a guide to this year’s event with the obvious caveat that things can change – sometimes at very short notice.

Where is the race held?

As always, the race will be held at Flemington Racecourse in Melbourne’s inner west.

When is it held?

The Cup is always on the first Tuesday in November. This year it lands on November 2. The race for the Melbourne Cup is at 3pm AEDT, but there are races all day with the first kicking off at 10.45am.

When did it start?

The first Melbourne Cup was run in 1861. It was declared a public holiday in Victoria in 1877.

The current forecast for the day is a sunny 29 degrees.

The Melbourne Cup is a ticketed event. Fully vaccinated ticket holders will be able to attend Flemington Racecourse. The state government has set a limit of up to 10,000 people with the race day forming part of the state’s “vaccinated economy” trial.

The Victoria Racing Club set aside 70 per cent of tickets for its members, with unsold tickets from the member allocation made available to the general public at the end of the member priority purchase period. You can check availability here.

If I’m lucky enough to score a ticket, how do I get there?

Public transport is available to and from the Cup. Trains from Flinders Street Station (platform 10) will leave every 20 minutes from 8.29am-12.29pm, stopping at Southern Cross (platform 14) and North Melbourne (platform 6) along the way, then running express to Flemington.

After the race, afternoon trains from Flemington Racecourse (platform 1) will leave every 20 minutes from 3.19pm-7.59pm, and will stop at North Melbourne and Southern Cross on the way back to Flinders Street.

I can’t go to the track, so what are the rules for my COVID-safe Melbourne Cup Day BBQ?

Current COVID-19 restrictions decree you can fire up the BBQ at home for up to 10 visitors, including dependants.

You can move your party to another person’s house, as long as the 10-person limit is observed. It’s highly recommended all visitors are vaccinated.

If you want to get together in a park or elsewhere outdoors then up to 30 people are allowed and masks are no longer required outdoors.

How far is the race?

The race is 3200 metres, which is roughly one-and-a-half times around the Flemington track.

How long does it take?

The last finisher Avilius crossed the line in a time of 3 minutes and 20.86 seconds.

What is a handicap?

This is a handicapped race, so what does that mean? Our racing writer Damien Ractliffe wrote a great piece explaining this recently.

Here’s a taste: Few are as authoritative on the subject as Greg Carpenter, Racing Victoria’s chief handicapper and executive general manager of racing.

Carpenter says the idea is to impact the performance of the contestants, so that competitors of lesser ability have an opportunity to compete on a relatively even playing field with competitors of greater ability.

“In golf, we understand the handicap is strokes against par, which is meant to even up the outcome between high-quality golfers and lower quality golfers,” he says.

“In athletics, a race like the Stawell Gift, the handicap is by distance. Faster runners start further back from the finish line than slower runners, by definition of previous performance.

“And in horse racing, the factor seen to impact performance is weight, and the idea is that, as additional weight is given to horses in a race with the highest established performance levels, it will slow them down and allow lesser-performed horses who are carrying lighter weight to be competitive.”

You can read the full story here.

Which horses are the favourites? 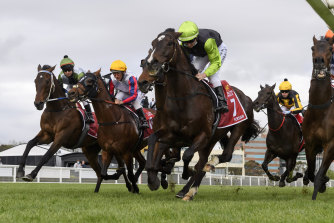 Incentivise (left), pictured here en route to victory in the Caulfield Cup, is favourite for the Melbourne Cup.Credit:Getty Images

The horse is trained by Peter Moody, who trained the unbeaten, retired racing champion Black Caviar.

Other key contenders to watch are English raider Spanish Mission and last year’s Cup winner from Ireland, Twilight Payment, which Sportsbet priced at $6.50 and $10 respectively.

Which jockey looks set to ride the winner?

Champion jockey Brett Prebble has ridden Incentivise for its past four races, and notably won the 2012 Melbourne Cup on thoroughbred Green Moon.

But he won’t be the only rider at Flemington on Tuesday who’s won the Cup before.

Jockey Craig Williams has ridden nearly two thousand winners, including the 2019 Melbourne Cup on Vow and Declare. He will ride Spanish Mission on Tuesday.

Last year’s winning duo Twilight Payment and jockey Jye NcNeil will also be back on the course. Jockey Kerrin McEvoy has won the Cup three times and will be going for a fourth on Grand Promenade, who is currently fourth favourite pick at $13 with Sportsbet.

COVID-safe measures will be in place on the day. The event is a trial run in the vaccination economy for large-scale events, and movement between the three spectators zones along the course will be restricted.

Punters will have to check in to the course upon arrival and show proof of full vaccination status.

Masks won’t be required to be worn outside, but they’re recommended when social distancing isn’t possible. They will need to be worn indoors at the course.

What entertainment will there be?

The cast of Moulin Rouge! The Musical will front the Garden Stage in Wildflower on Flemington’s lawn to perform Lady Marmalade after the Cup. 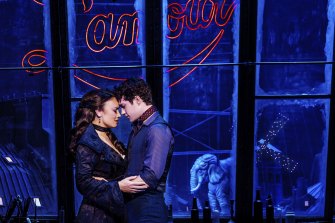 The fun doesn’t end with the last race.

Hot Dub Time Machine will be there supplying tunes for those who want to keep the party going into the evening.

Traditional dress code is encouraged on Flemington’s front lawn for general admission, but there are no set rules.

However, attendees of pink and green sections of the course will have dress regulations to observe.

For anyone over 12 years old, tailored pants, blazer, a tie and dress shoes are required – or a “suitable standard of racewear attire”.

It’s not explicitly stated a dress must be accompanied by a fascinator or a hat. But it’s the done thing, darling.

Will there be Fashions on the Field?

Like last year, the Victoria Racing Club will be holding a “Fashions on the Front Lawn” competition.

Contestants representing each state and territory for women’s and men’s racewear categories will dial in online and showcase their race week looks via a video link.

In a 2021 first, there will also be two “style-spotted” men’s and women’s entries selected from the crowd at the course to strut their stuff on the day.

Winners will walk away with more than $100,000 in prizes including a new Lexus UX250h 2WD Sports Luxury vehicle.

In the emerging designer category, upcoming designers will offer one look to the judging panel showcasing their design vision, manufacturing skill and creativity. There will also be a millinery award.

There are three “just for fun” categories that can be entered by posting to Instagram and tagging @flemingtonVRC: family ties, Cup week costumes and Cup week casual.

In the family ties category, the best-dressed family in carnival week will win a range of prizes, including a TCL TV package and Myer gift cards.

The Cup week costumes and Cup week casual categories allow entrants to throw traditional racewear rules out the window to flex their creativity. Winners will each receive a range of prizes, including a TCL package and Myer gift cards.

Where can I watch?

If you can’t make it to Flemington, the race will be broadcast free to air on Channel 10 and Channel 78. It can be streamed online at 10Play, Racing.com, or via Kayo. It will be shown on a slight delay on Foxel’s Sky Racing.

You can also follow along with our live coverage of the whole day’s action.