Andrew McDonald had a small but memorable cameo in one of the most infamous scenes of Australian cricket folklore.

On the night Simon Katich grabbed then vice-captain Michael Clarke by the throat in the SCG dressing room in January 2009, McDonald was a Test-match debutant watching wide-eyed with everyone else, first at the confrontation, then at Clarke’s quick exit. 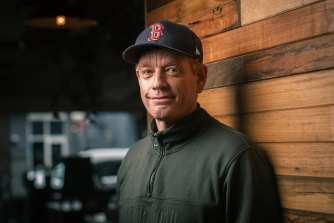 As reality dawned that the Australian team song would have to be sung minus one member of the team present – breaking all tradition – a remorseful Katich apologised to McDonald and Doug Bollinger for ruining their first Test match victory celebration.

It fell to McDonald to break the ice, quipping “oh mate, don’t worry, this happens all the time in Victoria”. In that moment, the mood lifted.

“It was a throwaway line – I wasn’t suggesting that does happen that way all the time for Victoria, but I think within any team there’s friction at times and it was a way to make light of the mood,” McDonald tells The Age and The Sydney Morning Herald. “So I did say it.

“Kato felt as though he’d compromised what should have been a really good moment, and the night went on and there’s always a lingering thought as to where Michael had gone and what had happened. I’m big on enjoying moments, enjoying wins in cricket and my focus was to have fun that night.” 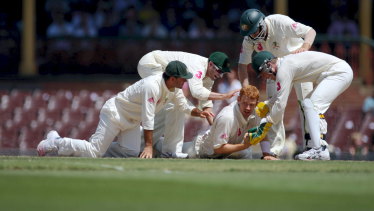 Andrew McDonald after taking a caught and bowled on debut to dismiss Jacques Kallis at the SCG in 2009.Credit:Steve Christo

Lightening the mood and letting the Australian men’s team breathe a little easier was always going to be part of McDonald’s commission as the man to replace Justin Langer. But after a messy transition ahead of the Pakistan tour, McDonald was characterised by some as the amiable “yes man” at odds with the hard-driving, hot gospel approach of Langer.

Following his resignation in February, Langer’s close friend, Alan Jones, fired from the hip at the players and the support staff around the ex-coach.

“Easy to be an assistant coach, all care and no responsibility,” Jones thundered on his Facebook page. “Easy to drink with the boys and share the view that the coach is a demanding bastard and things could be done differently. But the only transition out of success, when you turn your back on it, is failure.

“It was Justin Langer who said when he became coach that he wanted ‘character over cover drives’. It is obviously not good enough for the leaderless mob at Cricket Australia, or is the game now being run by players? And if so, what fate awaits the next coach if things get difficult in Pakistan?” 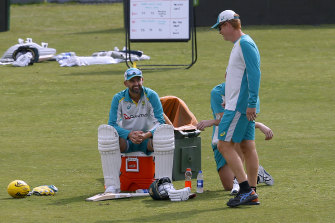 McDonald (right) talks to Nathan Lyon during a training session in Pakistan.Credit:AP

Of course, what happened in Pakistan was Australia’s first Test series victory there in 24 years, their first in any part of Asia in 11 years, and a contest played in perhaps the best spirit involving a winning Australian team overseas in decades. Jones has not revisited the topic since.

Asked about the “yes man” tag, McDonald deftly flips perspective. Why, after all, shouldn’t a coach accentuate the positives of his charges?

“I would say most times in any team, the positive conversations happen more often, because there are far more positives than negatives within most games,” he says.

“Whereas if you want to get caught up in how your team’s running … you use the terminology of being a yes man, where you give more positive reinforcement than negative. But I like to see it, the way we play as the Australian cricket team, there’s a lot of positives that go within that. It’d be remiss of our coaching staff not to focus on those.”

Away from cricket, McDonald is a follower of the Boston Red Sox, a team he picked up from the Carlton Fisk scene in Good Will Hunting, his favourite film.

Looking at Australia’s sporting conversation, something he too indulges in as a Geelong resident who spends time with the Cats and their coaching staff, McDonald notes the dominance of football codes in forming the way many see the role of the coach. Cricket, McDonald is at pains to make clear, has to be different.

“We’re in a country that’s driven by football codes and that’s probably what’s underpinned our assumptions about what cricket coaches do,” he says. “But we have a clear handover to a captain, who becomes the person who implements strategies on the field in the hours of play.

“Test cricket lends itself to allowing the coach to assist the captain with advice during the hours of play – lunch and tea breaks, sleep on it and chat in the morning as the conditions change too. But in T20 the game’s a little bit too quick to even contemplate that. So a lot of work is done in the preparation phase to make sure we’re covering off all the options that players will need, to deal with the problems thrown at them.” 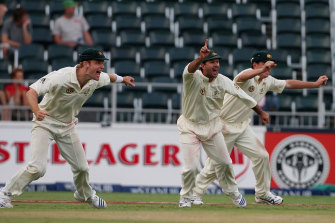 McDonald with Ricky Ponting and Marcus North as Australia seal victory in the first Test against South Africa in Johannesburg in 2009.Credit:Getty Images

One of McDonald’s formative experiences was to watch Ricky Ponting as captain of Australia in South Africa in 2009, one of the notable successes of a difficult era. Then coach Tim Nielsen worked faithfully as his lieutenant, while an effective strategy was formulated to beat the Proteas at home. McDonald’s role as a seam-bowling allrounder and stock bowler was significant in the result.

Members of that touring party remember McDonald as an intelligent, thoughtful contributor, whose own career might easily have been more substantial.

“A really good cricketer, very well-liked, extremely good character, a good, solid human – he could have had a greater career, but it didn’t turn out,” says one.

A point of commonality for McDonald and the current crop of players is that none were part of the era of Australian exceptionalism that ended more or less with the retirements of Shane Warne, Glenn McGrath and Langer in January 2007. They share a sense of admiration for those days, but also a desire to step out of their giant shadow by doing things differently.

“The memory from that South African tour was that we were no good, we were one of the worst teams to leave these shores and it was a bit of an eye opener that, ‘Wow, ok, this is people talking about the Australian team,’ ” McDonald recalls. “But I remember Ricky’s amazing leadership, cobbling that team together.

“The team gelled quite quickly overseas, and Ricky’s ability to get around to everyone and be clear on the role he and Tim Nielsen saw them playing, I saw a captain clearly leading and a coach clearly supporting the captain, with clarity the whole way through, and investment from everyone to buy into the roles they were to play.

“The environment on that tour was one where we were going to have fun playing for Australia – there’ll be some tough times, but we want this to be a great experience for you, and that’s something I’ve held on to right through my career to today. It’s a sport, it’s there to be enjoyed, it’s not always going to be enjoyable on the field, but the environment you can create off the field is really important, especially when you’re touring.”

So it was with the Pakistan tour earlier this year, a triumphant result in both cricketing and diplomatic terms. On the field, captain Pat Cummins led a group who endeavoured to work with, not against, the prevailing conditions, typified by Usman Khawaja’s calm accumulation of 496 runs.

Off it, McDonald drove a set-up where every effort was made to park the cricket at the ground, and allow the team hotels to be places of sanctuary, relaxation, coffees and golf simulations. At times, players had to get used to the fact the new coach was not angling for moments to address the team, instead leaving them to carry out the plans agreed at the outset, when the slow conditions and attritional cricket were characterised as a “15-day Test match”.

“It’s no slight on other Australian teams that have been to Pakistan, but you can’t play in spite of the conditions,” McDonald says. “You have to embrace them, you’ve got to find ways of winning because the opposition will line up against you in the way they think will make you less comfortable. We’ve got to be a team that travels well.

“The key thing is to manage our resources, whether they be players or coaches, to be at their best in those environments. So prioritising the key series where we want to have ultimate success, and then for other series be mindful we’re allowing our players some time and space away, so that when the key moments we’re going to be judged on come up, they’re fresh in mind and body.

“The environment you create can help you have your players at their best for longer, can help your staff be at their best for longer, and if we’ve got that attitude then hopefully that translates into performance. That’s not to dismiss the fact you need skills and capabilities to perform, but we think we’ve got a squad that has enough capability to be successful around the world.”

With Cummins, who McDonald terms a “connector of people” with “genuine curiosity about people and life”, the team’s emphasis is on not making life any more stressful or difficult for players than it needs to be. Watching the team play, McDonald’s visage will be more inscrutable than his predecessor – don’t expect any bin kicking.

“The ability to de-stress players is pivotal to sustained success.”

“I’ll probably be criticised at times in the hours of play for not showing that emotion,” he says. “But it’s about us getting information to present options so the players are ready to go. I will struggle and wrestle more during the preparation phase than during the hours of play because ultimately you’ve handed that over to the captain to go out and perform.

“It’s very difficult to hang onto that and ride that because you’ll probably exhaust yourself by the time your role really kicks in. The ability to de-stress players is pivotal to sustained success. You can get a performance spike no doubt [by increasing stress], but how sustainable is that? You don’t want players to feel like they’re drained by the time they come into a Test summer. You want them to be at their best or close to it for the tour that’s after a Test summer.”

And as much as McDonald is planning for the sustainability of the Australian men’s team across a surfeit of matches and formats, he is also wary of keeping his own life in perspective. He will make few, if any, mentions of his young family, and there is very little likelihood McDonald will do the job any longer than four years before moving on. The next transition will be smoother than this one.

A big role, then, but a supporting one relative to the players given clear top billing. “I don’t want it,” McDonald concludes, “to be all about me.”