If ever horses for courses were in play, Monday’s feature Goulburn meeting serves up some progressive wet track gallopers who are primed to steal the show.

Only three days after the neighbouring Canberra meeting was abandoned, the Goulburn surface may even improve from a near bottomless Heavy 10 to a 9 rating as the Big Wet seemingly moves on. 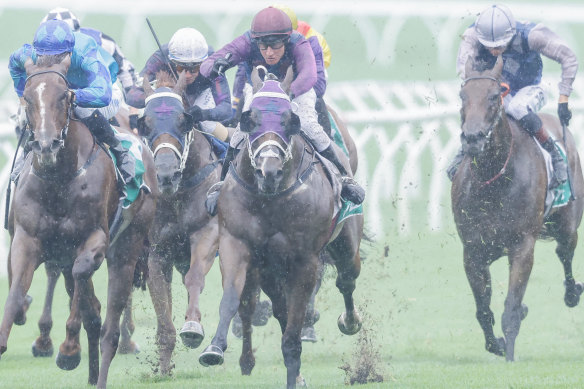 Racing returns to Goulburn on Monday on a predicted heavy track.Credit:Getty

That said, there’ll be no place for the faint-hearted, especially in a competitive feature Benchmark 66 Handicap over 1400m which shapes ideally for an improving mare at the bottom of the weights.

The Halo, a four-year-old daughter of renowned US sire More Than Ready, is primed to make it two straight wins after finally landing her maiden at Bathurst only 11 days ago.

Surging home from the back of the field to score running away, the win impressed connections enough to step her up sharply to this grade, having previously shown little in four mixed runs.

One thing’s clear to Hawkesbury-based trainer Brad Widdup: the Halo is a real wet-tracker. Parking well back in the field with plenty of cover, she should be right at home down the long Goulburn straight and of course dropping down to the minimum 55kg.

Of course in what should be a wide betting race, there’ll be plenty of challengers.

Tough Canberra five-year-old Dubai Centre is gunning for a third straight win also up in grade, while resuming Warwick Farm five-year-old Deel With Me and last start Benchmark 58 winner Eve ‘N’ Ruby can both command market support at good odds.

Meanwhile, the heavy conditions should also be a blessing for honest and nomadic Canberra five-year-old The Pres who is out to land only a third career win at his 26th start in a Benchmark 58 Handicap over a mile.

By Group 1 winner All American, he ploughed through the mud from well back at Nowra three months ago to win a Class 1, but in six starts since has doggedly run home into the placings in five of them.

Mind you, The Pres took a long time to settle down into the art of racing.

After debuting for Trent Busuttin and Natalie Young in Victoria in late 2019, he was only sparingly raced before being transferred into the Kevin Corstens yard at the end of 2020.

That lasted only a few months before he returned to his original stable, having only two runs until again moved on, this time over the border last spring and into the ACT where he has had 10 starts for current trainer John Rolfe.