Racing Victoria has announced fresh protocols aimed at boosting bio-security measures around horse transport, as the industry resumed in the state in the wake of jockey Mark Zahra’s negative COVID-19 test.

"Where government regulations allow, horses will be permitted to travel to Victoria, however any licensed or registered personnel, or essential personnel (those currently approved for access to race meetings and training centres) are not permitted to travel with such horses, other than employees of the approved float company," RV said in a statement on Friday morning. 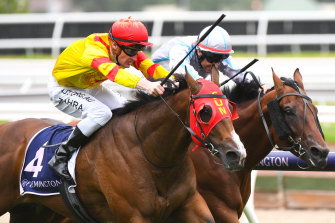 Freight drivers will also have to deliver horses to specific drop-off points and are not to enter licensed premises unless approved by stewards, and must stay in their cabin while horses are unloaded.

“Whilst the COVID-19 coronavirus does not affect horses, we need to ensure that the appropriate protocols are in place to manage the people handling them,'' said RV boss Giles Thompson.

Thompson praised Zahra for the stoicism and professionalism he had shown over the past 48 hours as racing ground to a halt while he underwent a coronavirus test.

Meetings at Sandown, Kilmore and Pakenham were abandoned on Wednesday and Thursday after Zahra revealed he had been in contact with a person who had tested positive for coronavirus. His test proved negative when the result was released late on Thursday night. In Sydney, jockeys Hugh Bowman and Tommy Berry also returned negative tests.

That meant racing was able to resume at Warrnambool and Pakenham on Friday. It also gave the green light to Sydney's major group 1 meeting, highlighted by the Tancred and Vinery Stud Stakes on Saturday, as well as Bendigo's Golden Mile meeting.

"Everyone was on tenterhooks all day. It's great news for Mark and all his family and I want to congratulate Mark for his professionalism and his responsible approach during the whole thing," Thompson told RSN on Friday.

"It was very admirable … we are very proud of a participant like that. It's a great relief all round."

Racing authorities in South Australia and Queensland have taken drastic action to cut costs and safeguard the sport.

On Friday morning, SA Racing announced that it was set to slash prizemoney by 15 per cent and cancel its Oakbank Easter carnival, which features some of Australia's best-known jumps races. Oakbank regularly attracts raiders from Victoria and New Zealand, which in the current climate is impossible.

Neither Racing Victoria nor Racing NSW, the nation's two major racing jurisdictions, have cut prizemoney. But as the coronavirus situation continues all possibilities are at some point likely to be canvassed, particularly for next year's major races if there is no let-up or if racing has to stop.

In Queensland, authorities have scrapped the traditional winter carnival – although the main features will still be run on separate metropolitan race-days – and divided the state into five regions where jockeys, trainers and horses will be effectively quarantined to compete in their zone.

The initiative is reported to save Queensland Racing $9 million, which can be used to underwrite the security of racing participants and the sport during the crisis.