Australia will co-host the 2028 Twenty20 World Cup and the United States will stage its first major cricket event after the International Cricket Council announced 14 host nations for the men’s major short-form tournaments from 2024 to 2031. 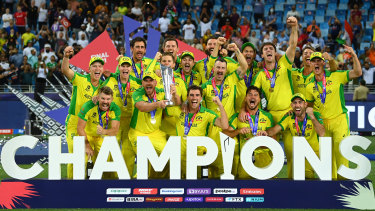 Australia celebrate their victory over New Zealand in the final of the T20 World Cup on Sunday.Credit:Getty

The Age and The Sydney Morning Herald revealed on Tuesday that a decision on venues for ICC events in the next cycle was imminent, and that an “outward, global focus” would mean they were more widely distributed than in the recent past.

“The ICC has identified the USA as a strategic market for growth that will benefit cricket around the world,” Paraag Marathe, chair of the Board of USA Cricket, said on Tuesday (Wednesday AEDT).

“A major event in 2024 will be the critical catalyst to improve facilities, develop a professional league, grow the fan base and inspire public and corporate support.”

Pakistan will stage the 2025 Champions Trophy, the first time it has hosted an ICC event since sharing the 1996 ODI World Cup along with India and Sri Lanka.

“To have 14 members hosting eight events is a reflection of the truly global nature of our sport and I’d like to thank every member that submitted a bid and offer our congratulations to the successful bidders,” ICC chair Greg Barclay said in a statement.

“It’s fantastic to be returning to so many previous hosts, but what is really exciting about this process is the countries who will stage ICC events for the first time, including the USA, which is a strategic growth market for us.

“This gives us the opportunity to deepen our connection with fans in traditional cricket nations and also reach new fans.”

The ICC added that a similar process would identify hosts for women’s and under-19s events for the next cycle.

Hosting the Champions Trophy will come as a huge boost for defending champions Pakistan, after New Zealand and England cancelled tours in September citing security concerns. Australia, however, announced that they would tour Pakistan next year for the first time since 1998.

International teams have largely refused to tour Pakistan since an attack by Islamist militants on the Sri Lanka team bus in Lahore in 2009 that killed six policemen and two civilians.

“I am pleased no end with the ICC’s decision to select Pakistan as a host nation for one of their elite tournaments,” Pakistan Cricket Board chairman Ramiz Raja said.

“By allocating a major global event to Pakistan, the ICC has expressed complete confidence and faith in our management and operational capabilities and skills.”