Johnny Allen had just walked out of the jockeys’ room at Caulfield about six weeks ago when he saw a text message from Irish maestro Joseph O’Brien.

The text was short, asking the Irish-born Allen whether he had a ride in this year’s Cox Plate. 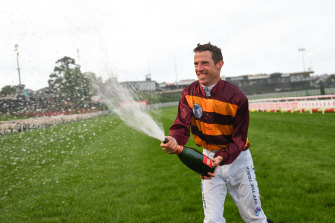 “I’d ridden for Joseph two years ago. I wasn’t even sure what he had in it at that stage, but I looked up the horse’s form and obviously, I got back to him and confirmed the next week I was available to ride [State Of Rest],” Allen said.

Securing rides in Melbourne’s elite races is a game of swings and roundabouts, particularly this time of year when one suspension or injury, or a change in weights can mean riders pick up opportunities they wouldn’t have otherwise got.

The Mornington Airbnb saga, which has seen Jamie Kah, Mark Zahra and Ben Melham rubbed out for the spring, has created opportunities for those ‘second tier’ riders who had previously struggled to get on board some of the more fancied contenders.

Brett Prebble and Daniel Moor are two that have grasped opportunities this spring, and now too has Allen, who is still pinching himself after claiming a Cox Plate, even if it meant a 25-minute delay in the stewards’ room.

“I suppose with all the commotion going on yesterday, with the protest, it was hard to take it all in, but it’s unreal.

“I knew crossing the line there was going to be a protest, so it was hard to really enjoy it. In those situations you’re always thinking the worst, so it was certainly a big relief it was dismissed.

“I suppose the Cox Plate and the Melbourne Cup are the two most iconic races in Australia, so to win one of those is unreal really. It certainly was unbelievable anyway.” 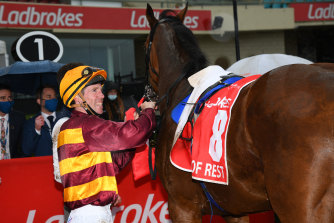 Punters were unable to hear the arguments of State of Rest jockey John Allen and his rival Craig Williams.Credit:Getty

Allen might have knocked off one of the majors 12 months ago, when he secured the prized ride on Aidan O’Brien’s three-year-old Santiago in the Melbourne Cup. A mishap at Werribee in the lead-up, however, saw the horse withdrawn from the race before he even made it to Flemington.

“I thought he would have been a big chance heading into the Cup, but it wasn’t to be,” Allen reflected.

“It was great to get the opportunity from Joseph this year to get on the horse and I suppose extra special for me on an Irish horse too, being Irish and with family back home. It probably got a lot more coverage back home than if it was an Australian horse I was on.”

After wins like Saturday’s, more doors will open for Allen. He’s already likely to pick up a plumb ride in this Saturday’s group 1 Empire Rose on Hungry Heart, whose regular jockey Kerrin McEvoy was suspended in Sydney on Saturday.

Allen also partners Hitotsu in the VRC Derby and Bruckner in the Coolmore Stud Stakes, and reunites with Explosive Jack in the Melbourne Cup after the four-year-old’s underwhelming Caulfield Cup effort.

“Obviously he’s going to have to bounce back from the Caulfield Cup, it was a disappointing run,” he said.

“It was the only time he’s ever disappointed us in his career, so we’re hoping he can bounce back and put up a good show.

“That’s the way we’re looking at it. We’re hoping a big track at Flemington will suit him.” 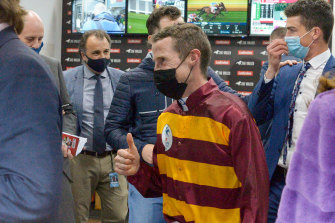 Allen has 13 group 1 wins to his name, but it was with Darren Weir where he made his mark. Following Weir’s disqualification from the sport, Allen has had to work even harder to get back to the top. There are few heights greater than a Cox Plate.

“I’ve probably had good support from owners, through Weir’s owners that I’ve ridden for, a lot of them stuck by me so that definitely helped,” he said.

“Darren probably gave me the chance and put me on the map, and then it was probably up to me then to prove myself that it wasn’t just Darren’s support that got me to where I was.

“I suppose I had to prove that I was capable enough of delivering on the big stage.”