The Twenty20 World Cup is on track to set a new record for attendance at a women's sporting event in Australia despite the host nation's sluggish start to the tournament.

While the dream for tournament organisers is to break the world mark of 90,185 the domestic record is within reach with more than 50,000 tickets already sold for the March 8 final the MCG. 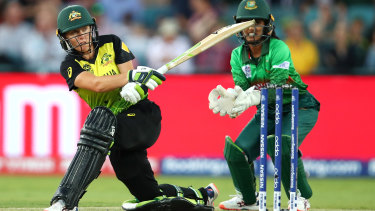 Alyssa Healy takes to the Bangladesh bowling attack in Canberra on Thursday night.Credit:Getty

The hosts’ got their campaign back on track on Thursday night in Canberra, thrashing Bangladesh, while India did them a favour by squeaking home against New Zealand.

Ticket sales are only a guide to attendances as some may decide to miss the final if Australia, the odds-on favourite to win the World Cup, do not make it.

Tournament organisers, however, are hopeful fans will still attend to celebrate women's sport on International Women's Day, while pop superstar Katy Perry is performing before and after the game.

"Regardless of who's in the finals and semi-finals, you'd like to think people will come along and be a part of hopefully what is a really special and historic occasion," T20 World Cup chief executive Nick Hockley said last Sunday.

"What we see so far is people are really looking forward to it and we're encouraged with where the attendances are currently."