It was a 21st worth celebrating. Australia's women have completed a 232-run demolition of New Zealand to equal the world-record mark of one day international victories and cement their reputation as one of our finest national sides across any sport.

Already the world T20 champions, the Australians have now moved alongside Ricky Ponting's 2003 team in compiling 21 wins in a row in the 50-over format. They have consistently downplayed the feat but their dominance has been a sight to behold and it seems only a matter of time until they hold the record outright. 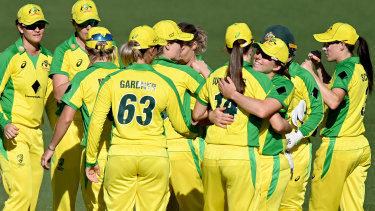 Australia celebrate victory in their series against New Zealand, bringing their win streak to a record-equalling 21.Credit:Getty

When that opportunity comes remains to be seen given the uncertainty of scheduling in the COVID age. A visit from India later this year looks shaky but a trip across the Tasman in February and March is a strong chance. Win number 22, in that case, could come against the White Ferns, who have now lost nine straight to Australia and have become something of a Washington Generals to the globetrotting Australians.

With the Rose Bowl already secured in Brisbane and Australia up 2-0 in the three-game series, the Kiwis had nothing to lose at Allan Border Field, although their task was made the more difficult by the absence of star bat Suzie Bates and fast bowler Lea Tahuhu.

That being said, Australia was fielding a team without captain Meg Lanning and allrounder Ellyse Perry for the first time since 2009. They didn't miss a beat, with Rachael Haynes (96) and Alyssa Healy (87) setting the pace as Australia won the toss, batted and set New Zealand a mammoth chase after finishing at 5-325.

That was well past the figure of 289, which was the previous highest successful women's ODI chase. It was the second highest score ever set in Australia, the highest against New Zealand and the fourth-highest in history. They had no chance. 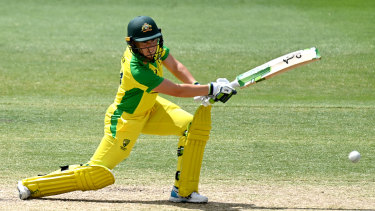 Alyssa Healy set up the win with a run-a-ball 87.Credit:Getty

After a bumbling performance in the field, where multiple Australians were given welcome lifelines with simple drops and mix-ups, the confidence-sapped White Ferns were up against it when they came out to bat and it showed.

Megan Schutt would remove Kiwi skipper Sophie Devine for a duck to have them 1-1 and that wicket became a procession. Aside from a dash of resistance from Amy Satterthwaite (41), the top order would crumble to see New Zealand reduced to 5-54 after 15 overs.

With the result assured, Australia ground them down to complete a win that would have been regulation on any other day. This time, it assured them of a place in cricket history. They aren't done yet, either.

Australia was on from the start. Healy came out blazing and showed her customary intent from the opening deliveries. She was given a life on 61 when a top edge swirled around before dropping to the ground in front of Katie Perkins and Amelia Kerr, who managed to confuse each other enough to ensure nobody made an attempt.

Healy had more good fortune on 67 when she swept to Perkins at deep backward square leg. Perkins didn't seem to pick up the flight of the ball and Healy poured on another 20 runs before Kerr finally managed to hold onto one.

Haynes was dropped on 81 and looked on target for a century before she was trapped in front by Kerr for 96. But the launchpad was firmly in place and some lusty late hitting from Ash Gardner (345 off 20), Beth Mooney (29* off 19) and Tahlia McGrath (29* off 11) sent the tally well beyond reach.