Ticket sales for the Twenty20 World Cup final have passed 80,000, putting the world record attendance at a women's sporting match within reach.

Organisers are hoping to fill the MCG on Sunday and top the 90,185 people that watched the 1999 women's soccer World Cup in California. 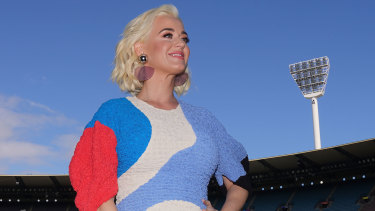 American singer Katy Perry poses ahead of the Women’s T20 World Cup final at the MCG.Credit:AAP

The contest is now almost certain to surpass the biggest attendance at a women's cricket match.

A crowd of 80,000 watched Australia defeat New Zealand in the 1997 the one-day World Cup final.

The highly anticipated clash on Sunday will smash the highest crowd for a stand-alone women's match in Australia.

That was achieved last year when 53,034 people watched the Crows defeat Carlton in the AFLW grand final at the Adelaide Oval.