Home » Three into one doesn’t go: three stablemates fight for one Cup berth

Leading Victorian trainers Ciaron Maher and David Eustace will have three runners in Saturday’s Andrew Ramsden Stakes, but just one Melbourne Cup ticket will be on offer for the winner.

Persan, Grand Promenade and Through Irish Eyes all boast very different profiles, but come into the race with form good enough to claim a direct passage into Australia’s greatest race. 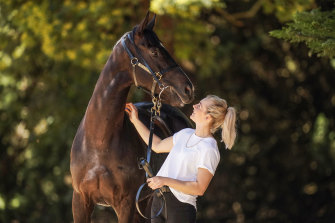 Persan has been there before, running fifth in last year’s Melbourne Cup after earning his way into the 3200-metre race via the exempt Bart Cummings Stakes.

His recent form has been strong, despite his fourth-of-five performance last start on Anzac Day at Flemington as an odds-on favourite.

Of his three horses, Eustace says Persan is the best-credentialled to claim the third running of the exempt 2800-metre race. But he is coming off a shock loss.

“He was disappointing at Flemington and left us scratching our heads, but nothing really major came of it,” Eustace said.

“We’ve just freshened him up a bit and hopefully that does the trick.”

Grand Promenade, carrying Gerry Ryan’s colours worn by Michelle Payne in Prince Of Penzance’s 2015 Melbourne Cup win, is the horse on the up, boasting five wins from 13 career starts, including a last-start win at Sandown.

Saturday’s race will be the first time he gets out to 2800 metres, but with two wins at 2400 metres the British-bred horse should enjoy the trip. 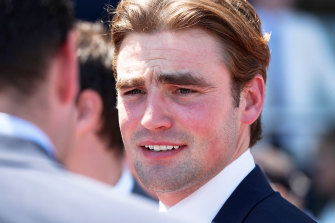 “He rolled out in front the other day quite nicely. He’s a big actioned horse and we’d probably allow him to do the same on Saturday.”

The x-factor horse is Through Irish Eyes, a three-year-old gelding by Tavistock, en route to the Queensland Derby.

“[We’re] really looking forward to him running and seeing [where he’s at],” Eustace said.

“We think he’s improved again, which he’s going to have obviously done [to win]. He’s going to relish the step up in trip and he saves an awful lot of energy so it’ll be interesting to see where he measures up in a race like this.”

Eustace said it was hard to split them but he hoped all three would get into the Melbourne Cup field by the time the first Tuesday of November rolls around.

“I don’t think anyone can really, including us, have a firm view either way as to [who to pick]. On figures, Persan should win – out of the three anyway – but he’s coming off the back of a disappointing run,” he said.

“Grand Promenade has probably got to improve the most to [get into a Melbourne Cup].