Home » ‘They shut the avenue off’: Umpire Reiffel thwarted in bid to leave IPL

Australian umpire Paul Reiffel was 10 minutes away from leaving the Indian Premier League’s biosecure bubble on Wednesday when he learned his passage out of India had been shut on him.

Worried he would be left stranded by the worsening situation in the coronavirus-ravaged nation, the former Test seamer decided early this week to cut short his stint officiating in the IPL and fly home while he had the chance. 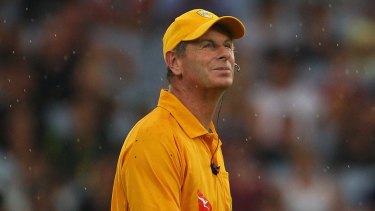 Paul Reiffel had planned to leave the Indian Premier League and return to Australia but his travel plans were thwarted.Credit:Mark Kolbe

The situation for the father of three would have been worse had he left his hotel before finding out the change in travel plans. This would have resulted in him requiring to complete a period of self-isolation in order to be able to complete the tournament.

“I was 10 minutes away from leaving the bubble, so I’m very lucky,” Reiffel said.

Even though the situation in India was not as bleak when he accepted the Indian board’s offer to umpire in the IPL, Reiffel knew of the risks of being abroad during a global health crisis – but said he could not knock back the work.

Unlike the players, some of whom are paid millions for just under two months’ work, umpires cannot command such fees.

A member of the International Cricket Council’s elite panel of umpires, Reiffel would normally be travelling the world officiating in international fixtures, but the opportunities have dried up since the onset of the pandemic last year.

He took part in last year’s IPL in the UAE and stood in Australia’s home summer, but was unlikely to umpire another game until next season due to the difficulties with travelling.

“It’s how I make a living. In these COVID times I haven’t umpired a lot so any opportunity to get some work, you take it,” Reiffel said.

“You know any travel can end up any which way. It’s how I make a living. To knock back work, you just can’t afford to. You have to look at everything and try and weigh it up. When I accepted and it all started, it was a very different landscape.

“It escalated pretty quickly but that’s what happens with COVID. It happens quickly and a lot of the times you can’t see it happening.”

Though Reiffel now faces a nervous wait to see if he will be able to return home, he feels safe inside the IPL bubble at a five-star hotel which was shielding players and officials from the “real world”.

“It’s a whole lot more quiet than usual, it’s a bit unusual for India,” Reiffel said. “There’s still people about but it’s very quiet, there’s a lot of people at home. It’s hard to tell what life’s like. It’s just the hotel and cricket.