She doesn’t yet know the reason behind her name, or how she only missed the chance to meet an inspiration for so many by a couple of days, but the smallest fan of The Everest will learn her lessons pretty quickly.

Scarlet Nini Collett’s little six-week life has had a lot packed into it already.

Just this week, she moved back into a home her parents, jockey Jason Collett and partner Clare Cunningham, had to vacate late in Cunningham’s pregnancy so Collett still had a chance to ride in the world’s richest turf race.

Living in the Liverpool LGA, which was declared a hotspot during Sydney’s COVID outbreak, Collett and Cunningham made the difficult call to pack up and rent a place in the city’s eastern suburbs. It meant he could keep riding throughout the spring carnival.

Collett and Cunningham, a racehorse trainer herself who decided to close down her business this year to start a family, decided their daughter’s middle name should be Nini, a touching tribute to the long-time Australian Turf Club social media manager who died in August after a decade-long cancer fight. 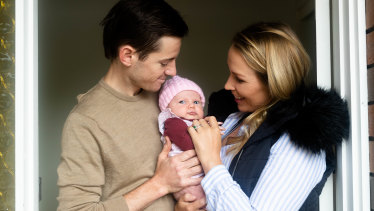 Her passing was only a couple of days before Scarlet was born.

“I wanted to catch up with her in person to ask if it was OK, but I had this sensation I better ask in a message,” Cunningham said.

“She was very emotional and couldn’t talk when I asked her if it was OK to use her name for Scarlet’s middle name. She said her and Muz [husband Murray Conallin] were very emotional and honoured. I was really happy I got the chance to ask her and didn’t wait any longer.

“I adored Nini, I was so lucky to have her in my life and she was one of the first people that took me under her wing and made me feel welcome in Sydney when I moved here. She was a wonderful person and we’ll always remember her.” 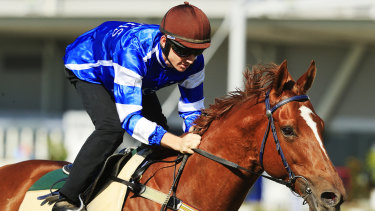 Conallin’s brave battle with cancer started with a diagnosis from doctors, who said she only had six months to live if not given aggressive treatment.

In the next 10 years, she documented her fight and became a beacon of hope for people in the racing industry and beyond. She drew strength from being able to sash Winx after many of her memorable wins in Sydney.

Scarlet’s life might change immeasurably – not that she’ll know – if Jason can boot home Gytrash in the $15 million sprint at Royal Randwick on Saturday.

The South Australian sprinter, who runs under the Inglis slot, will start among the favourites for The Everest. But it will only come after a hectic few months for Collett as he took extra steps to stay in the saddle, including standing himself down from riding for a short quarantine period so he could attend the birth.

Racing NSW chief executive Peter V’landys and chief steward Marc Van Gestel both helped Collett and Cunningham with their living arrangements, which has allowed him a chance for a career highlight in The Everest.

“It was stressful,” Collett said. “Clare coped really well, she probably coped better than I did initially. I like routine and that threw things really out of context for me. It took a little bit to get comfortable again.

“We joked about it the other night actually. When they said it could be up to three months [we would have to leave home], we laughed. Now, here we are.”

Said Cunningham: “It was just something we had to do. It felt like a bit of a jump signing a three-month lease on a place. We were thinking we were only going to need it for a month. The timing of the carnival approaching and Jason’s opportunities, he had to take them. We had to keep him riding I suppose.”

The connection between Collett, Cunningham and Gytrash extends well beyond raceday.

Cunningham looked after the horse while he was in Sydney last year before his trainer Gordon Richards arrived from Adelaide, and is still using her old barn to house him this time. She’s hoping he can go better than last year’s third in The Everest, which preceded his win in the Yes Yes Yes Stakes a fortnight later.

“I wasn’t at the races when he won [that race], but I was at the nail parlour and I was screaming,” Cunningham joked. “All the people there were laughing at me. It was a huge thrill.

“The owners, his trainer and his wife [Jacqui] make it very enjoyable. I’ve been involved with a fair few group 1 horses, but I’ve never met a crew so happy to share their horse with everyone I suppose.”