Sadly, there was little to be surprised about in the first Ashes Test at Brisbane. I was surprised by the selections – but not that England got it wrong. The batting did not surprise me – as soon as there is heat in the kitchen, England cannot cope. The fielding has been consistent – consistently poor. The mentality needs to be much stronger, too, to find a way to stay in the game and grit out tough moments. They need a 50 per cent improvement in all four of those areas.

At Adelaide, England will be helped by the injury to Josh Hazlewood. Jhye Richardson is a good bowler but is inexperienced and does not have the proven quality of Hazlewood. That could give England a little opening.

It is so important England get selection right. It looked like they went in with almost a preconceived plan in Brisbane. For Adelaide, they have to pick the team based on what is in front of them. They cannot think about Melbourne, Sydney and Hobart or any sort of pre-planning. Worry about those Tests later. They absolutely have to win this week. If they do not, it could be 2017-18 all over again.

Do you play a spinner? I never like to see five seamers, I think it is too many, but if it does not look like spin is going to play a big role, England could leave out Jack Leach.

If you bring in James Anderson and Stuart Broad, it means Chris Woakes does not have to play. One of Ollie Robinson and Mark Wood will definitely play. The problem is, after how badly the batting went in the first Test, I would not pick a team with Robinson strolling out at No.8 in Australia. It is not so simple just to play Anderson, Broad, Robinson and Wood together.

If Ben Stokes is fit and the pitch is not going to turn, I would potentially look to change the balance of the team. You could really pack the batting, using Stokes as the fourth seamer and Joe Root as the spinner. That would mean you could potentially bring in Zak Crawley or Jonny Bairstow for an extra seamer, and then have Bairstow or even Jos Buttler at No.8. If Stokes is not ready to do that bowling load, then you cannot change the balance in this way. 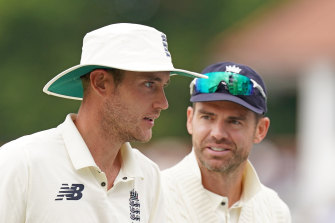 Stuart Broad and James Anderson were not picked for the Gabba Test. Credit:Getty Images

The fact England’s batting is so bad is affecting the spinner. England are not getting the big scores that take the Test into days four and five and give the spinner some runs to play with, as they did with Graeme Swann in the 2010-11 Ashes. If you are getting bowled out for 147 on day one, the spinner has no chance.

There were many guilty parties for what happened at the Gabba, but by far the biggest was the batting. England scored 444 runs – that is not good enough. Of those 444, 162 came in one partnership between Root and Dawid Malan. You are not beating many teams with that batting.

There is a lot of chat about Rory Burns. The problem with Burns is that technique is questionable. He always needs a bit of luck early in his innings. His technique is very unorthodox but it can work – he has got Test hundreds, he has got a hundred against Australia. He has a strong mentality.

Burns has had problems – the fourth-stump line, the short ball, spin bowling, now that leg-stump line. He has generally managed to come through them, but there are only so many times you can go to the well. Not only did he not get many runs, he dropped a dolly in the slips off David Warner. When things go wrong, they generally go wrong quickly.

But it is not only Burns. Ollie Pope is a worry. He looked good in the first innings, but it was a really basic error in the second, trying to cut a ball that was too straight at the start of his innings.

There were concerning signs from the senior players, too. Stokes is lacking game time. Buttler looks vulnerable on and around that off stump, though at least he looked fluent. But other than tactically, I do not think you can change your batting line-up after the first Test. You have got to give them at least one more Test to try to put things right.

It intrigues me to see how England try to halt this Australian juggernaut. They have not been able to in the past few tours, except 2010-11. The other teams this century who lost at the Gabba were not smart enough, tough enough or good enough to turn it around.

Can this England side prove many people wrong this week? It is a hell of a challenge.