Paine has been accused of inappropriate conduct by a former Cricket Tasmania employee. 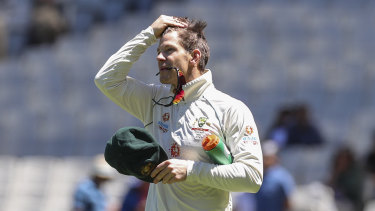 Paine confirmed his resignation on Friday at a media conference.

In a statement CA said: “Tim Paine has advised the board of Cricket Australia of his decision to stand down as captain of the Australian men’s Test team, effective immediately.

“The board has accepted Paine’s resignation and will now accelerate the process of identifying and appointing a new Test captain.”

CA Chair Richard Freudenstein said: “Tim felt it was in the best interests of his family and Australian cricket to take this decision to step down as captain.

“The board has accepted Tim’s resignation and will now work through a process with the National Selection Panel of identifying and appointing a new captain.

“While the board acknowledges an investigation cleared Tim of any breach of the code of conduct regarding this matter some years ago, we respect his decision.

“CA does not condone this type of language or behaviour.

“Despite the mistake he made, Tim has been an exceptional leader since his appointment and the Board thanks him for his distinguished service.

“Tim will continue to be available for selection in the Test team through the Ashes summer.”