Teenage fast bowler Stella Campbell has been added as an injury replacement to Australia’s squad as the group prepares to take on England in the Women’s Ashes Test match on Thursday.

Campbell, 19, made her debut against India in September and comes into the squad following a foot injury to bowler Tayla Vlaeminck. 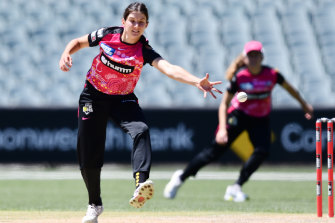 Campbell was elevated to the main squad after taking 7-25 at Manuka Oval in a domestic one-day match earlier this month in a display which impressed national selector Shawn Flegler.

“Stella bowled well for us in the Test match against India and provides another fast bowling option now with Tayla being injured,” he said.

“We will continue to assess conditions over the next couple of days before finalising the team.”

Star all-rounder Ash Gardner said Campbell would make a great addition to the squad in the lead up to the Test and will provide Australia with strong bowling options.

“To have her back into the Test squad is exciting,” she said on Tuesday.

“Hopefully, if she does play she can replicate [her figures at Manuka earlier this month]. Having plenty of bowlers in the side is a good thing.”

Star batter Beth Mooney was also named in the squad on Tuesday and remain in contention to line up for Australia just nine days after having surgery for a broken jaw.

The 28-year-old was injured by a ball in a net session gone wrong and underwent surgery last Tuesday.

Originally, Cricket Australia said it would make a call post-injury on whether Mooney would even be available for the March World Cup in New Zealand, but she was back in the nets by Friday.

Gardner said the group was excited for the Test given how infrequently the women play red-ball cricket and said she had gone to Nathan Lyon for advice going into the four-day match. 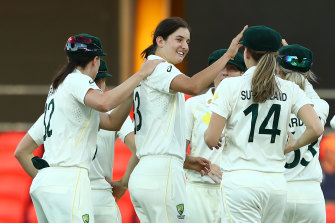 The Test match in Canberra will mark the teenager second hit out with Australia. Credit:Getty

“We don’t play a lot of it, unlike the men where they play a five-match series,” she said.

“We only play 50-overs and T20s for our domestic league, so you only really get exposed to long format cricket when you do play for Australia.”

Cricketing star Ellyse Perry was also named in the Test squad after her shock axing from the Ashes T20 matches.

“She’s fantastic in this format,” Gardner said about Perry’s selection.

“I don’t know how many times she’s been dismissed, but it hasn’t been many. She’s built for this type of format.”

Australia will retain the urn if they take out the Test which starts on Thursday. Australia head into the match up at Manuka Oval with a 4-2 lead after taking out the first T20 match in Adelaide before the final two were washed out due to the rain.