The interstate switch utilised by Team Hawkes has been a successful ploy in recent times, and it could be the making of the lightly raced galloper Newley Wed who takes her place in a 1200m maiden at Newcastle on Thursday.

The three-year-old is resuming, and early shoppers have backed her into favouritism after two slashing runs at Sandown Hillside last preparation. 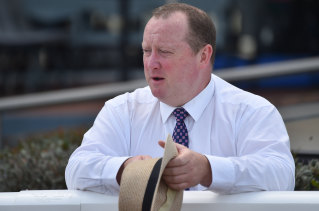 She was solid on debut, then arguably should’ve won before spelling after being severely checked at a critical stage before picking herself up and savaging the line to run second.

Further, even after the interference, she recorded the fastest final 200m split of the meeting, and there have been two subsequent winners to confirm the form.

The filly is a nice type who has key racing attributes, and a repeat of her last prep figures will make her hard to beat.

John Thompson saddles up Aircraftman who looms as the main danger and has raced consistently in fast time races this preparation.

Punter’s Intelligence recorded he ran the fourth fastest final 400m individual sectional of the entire meeting in 25.08 when honest in defeat at Canterbury 22 days ago.

The gelding can tend to over race, but he has a positive map and a fitness edge on his main rival.

Podium returns as a gelding in the OAS Technology Maiden Plate (1300m) and is coming out of time/sectional merit races from last preparation with numerous subsequent winners since at the metropolitan level.

He has recently trialled well under light riding at Rosehill and looks well-placed here first-up to run boldly for trainer Chris Waller.

The Novocastrian Electrical CG&E Benchmark 64 (1400m) emerges as an exciting finish to the day with multiple winning chances.

Rock-hard fit on-pacers Riviera Blue and Aspen Chase, who represent value, had excuses last start and have winning figures for this event.

Brock Ryan is a jockey to watch, riding 10 winners out of his past 100 rides at a profit on turnover of 12.7%. The in-form rider is booked for two rides today in races four and seven.