Cricket Australia has been warned it should prioritise the retention of the Ashes next summer over the pursuit of an elusive Twenty20 World Cup, even if it means resting big guns Steve Smith and Josh Hazlewood from a major global event.

National coach Justin Langer and his management team have the delicate task of juggling what appears to be the competing interests of the Test and T20 side in a year when both trophies are up for grabs. 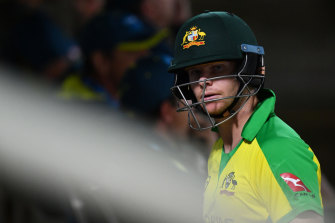 Test stars like Steve Smith can expect to play plenty of Twenty20 this year leading into the Ashes.Credit:Getty Images

Former Test captain Ian Chappell is not known for his sympathetic views for the game’s administrators but understands the conundrum. “One’s a world event, you’ve got to give it some favouritism,” Chappell says.

There is a recent precedent for CA, which went to great lengths in 2019 to make sure the team’s preparations for the World Cup and Ashes did not compromise each other.

At considerable expense, it sent a shadow squad over to the UK to play the counties followed by a “probables v possibles” Ashes dress rehearsal before finalising a squad.

Former captain Mark Taylor, who wants CA to prioritise the Ashes over the World Cup, believes selectors will “seriously consider” leaving Smith and Hazlewood at home so they are ready to defend the urn. Hazlewood was controversially left out of the 2019 World Cup to focus on the Ashes.

“Whether they do it or not I don’t know but it will be something they will discuss,” Taylor said. “We’ve never won the T20 World Cup. Yes we’d like to win it but having said that the Ashes will be the benchmark for a lot of people who watch the game.

“That’s where we’ll work out where we think our team is at. If we win the World T20 but then lose the Ashes, a lot of people will be very concerned Australian cricket isn’t where it should be at. It’s a real juggling act.”

Taylor has a better appreciation than most of the fallout of a home Ashes defeat. The former CA board member co-authored the root and branch Argus review into the game commissioned after the humiliating defeat of 2010/11, resulting in a new coach and a restructure of the selection panel.

“It’s generally what happens. Having lost this series at home to India at home, I don’t think anyone will want to see lost back to back series at home,” Taylor said.

Australia’s improvement in the T20 arena to the point where it is one of the leading contenders for this year’s tournament in India is another consideration, so too the fact there will be another World Cup at home next year after the 2020 edition at home was postponed to 2022.

Australian white-ball captain Aaron Finch said on Monday he would be “surprised” if there were high-profile absences from the T20 World Cup.

“I would be very surprised if they did put their hand up and say they didn’t want to be a part of it [T20 World Cup],” he said. “I don’t think that will come into consideration, to be honest.

“I think that the way that we have played T20 cricket, the way that we have structured up the side, we are looking to play our best team. The opportunity to win world titles doesn’t come around every day of the week. I think you have got to take them when they come up.”

Adding more complexity to selectors is the age profile of Australia’s T20 side, with key stars like Finch, Warner and Glenn Maxwell all well into their 30s.

“If we wait until October of 2022, the Finches and Warners are getting a bit older, no one really knows what sort of form they will be in,” Taylor said. “I think the vast majority of people will want to see Australia hang on to the Ashes, which is important for Australian cricket’s point of view.”