Home » Sports News » Star power: How Cricket Australia can save the BBL

Rashid Khan and other global Twenty20 superstars may still be secured by the Big Bash League – provided Cricket Australia can thread the needle between scheduling, money and the demands of clubs and local players.

Though the announcement of the new, cash-flushed UAE T20 league for January-February next year has sent many an administrator, player agent and broadcaster scrambling to hear more about CA’s plans, there is a viable pathway for the leagues to co-exist. 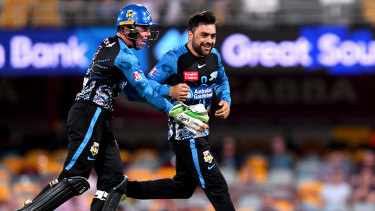 Rashid Khan is the sort of star player likely to split his time between the BBL and the UAE league.Credit:Getty Images

Senior cricket sources have told The Age and The Sydney Morning Herald that CA hopes to be able to attract top global Twenty20 talent down under for about the first month of the tournament – mid-December to mid-January – before their exodus to the UAE and elsewhere is compensated by the broader involvement of senior Australian players.

Marquee overseas names to be placed in the BBL’s first draft later this year will not be asked to play every one of the tournament’s 14 regular season rounds. Instead, they are likely to be offered six-figure deals to play for anywhere up to a month.

At the same time, CA and the Australian Cricketers Association have held informal discussions with the likes of David Warner, Pat Cummins, Mitchell Starc, Steve Smith and Josh Hazlewood about getting them involved in the latter part of the tournament following the Sydney Test.

That way, head-turning talent would be a part of the BBL for almost all of its length, rather than the current state of affairs when many of the world’s best find better value for money elsewhere, and Australia’s top players opt out. Such a scenario would be aided if the scheduled January ODI matches between Australia and South Africa are rescheduled or cancelled, as now appears likely.

There are two ways, however, in which plans may yet be disrupted. First and most critically, the start date of the UAE league may preclude some overseas players from taking part in much or any of the BBL.

Should it begin around January 6, many players may decide simply to play the T10 league, also in the UAE in early December, spend Christmas and the new year at home and then head straight back to Dubai.

UAE administrators have indicated, however, that they wish to find the most agreeable window in concert with other national boards. That undertaking must be balanced with the whims of the tournament’s rich backers, many of whom also own Indian Premier League clubs.

Secondly, CA and the state associations are conscious that BBL list managers, general managers and head coaches are not exactly enchanted with the idea of mixing and matching players in order to ensure the biggest names take part.

Many clubs, following the example set by the Perth Scorchers last season, would prefer continuity and the signing of skilful, lower-profile players who are willing to go on the journey with them for a whole season, the better to build a cohesive team and plan.

The tension between box office appeal and functional team dynamics and performance was laid bare by the recent exit of Chris Lynn from the Brisbane Heat, after a decade as the club’s most saleable name.

There has been remarkably little interest among other BBL clubs in signing Lynn, leaving open the distinct possibility that this summer he will ply his six-hitting trade in the UAE, South Africa, Bangladesh and Pakistan rather than on home soil.

Another dimension will be added to this debate by the expected announcement from Cricket Tasmania that Ricky Ponting will assume a senior list management role with the Hobart Hurricanes.

The former Test captain Tim Paine is also likely to be involved on the coaching staff, while the seasoned Tim Coyle has been mentioned as a possible replacement for Simon Insley as the state’s high-performance chief. It remains to be seen whether Justin Langer can be convinced to re-enter cricket with a Hurricanes role.