Sri Lanka have lost three players to positive COVID-19 tests on the eve of the second Test against Australia, forcing a late rush for replacements ahead of the match the hosts must win to square the series. 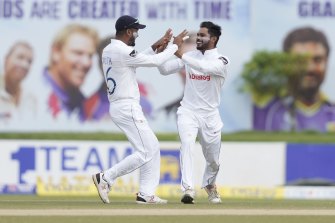 These outs mean that the uncapped spin pair Maheesh Theekshana and Dunith Wellalage are certain to make their debuts on Friday. Theekshana’s mystery spin and the 19-year-old Wellalage’s left-armers both proved effective against Australia during the one-day series.

The all-rounder and former captain Angelo Mathews is fit to play after he withdrew from the third and final day of the first Test with COVID. Under series protocols, anyone returning a positive test must isolate for five days.

Australia’s squad has not had any positive COVID tests on the tour, however the arrival of the head coach Andrew McDonald in Sri Lanka was delayed by a week after he fell ill with the virus shortly before his scheduled departure.