One of the best bowling spells in franchise history has sent the Thunder into the Women's Big Bash League finals after the Sydney team secured a six-wicket win over the Hobart Hurricanes on Sunday morning. 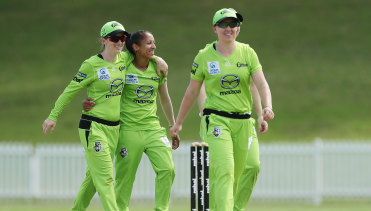 South African fast bowler Shabnim Ismail finished the Thunder’s fielding innings with figures of 3-10, marking the third most economical four overs bowled for the side in WBBL history.Credit:Getty

"But I think the pipeline that we have and the answers coming through just shows what kind of character and what kind of depth we have."

Ismail managed 19 dot balls during her four overs – the most by a Thunder bowler in WBBL history.

At one stage, Ismail's speed proved dangerous as Sasha Moloney received a bouncer to the head. Luckily, the star batter was left uninjured and continued in the middle.

The speedster's effort handed the Hurricanes a horror start, falling to 3-4 at one point.

Post-match the 32-year-old said the early onslaught was planned by the side.

"We spoke about being ruthless within the first six in the game," she said, "I think we've done that really today … we put them on the back foot which put us in the front seat."

But the early wickets managed to scare Rachel Priest and Moloney into action, with the duo able to build a partnership to redeem their side's innings.

Priest was later dismissed for 32 before Moloney (39) was also sent to the sheds, and while the Hurricanes couldn't build a big total, they finished with a competitive 115 from their 20 overs.

The Thunder's batters chased down the target steadily and calmly, however, with Tammy Beaumont (22), Rachel Trenaman (16) and Heather Knight (25) all contributing.

Seventeen-year-old Phoebe Litchfield (25) also proved she is able to step up when required, keeping calm in the back end of the Thunder's batting innings to take her side into the finals.

The Thunder win means the Sydney Sixers will now be relying on an unlikely loss from the Perth Scorchers.

"We've got a great batting line-up and a great bowling line=up, it's just for us to go out there believing in ourselves and just executing those skills the best that we can," Ismail said of heading into the semi-finals.

"We would love to keep the momentum on our side … we want to put our best foot forward."