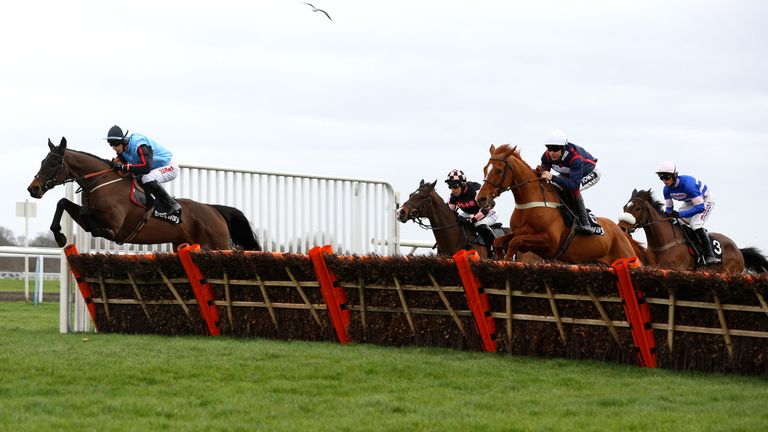 Song For Someone produced a power-packed late thrust to get the better of a thrilling finish to the Betway Kingwell Hurdle at Kempton.

The Grade Two was due to be run at Wincanton last weekend, only for Storm Dennis to scupper that plan, but Song For Someone took full advantage of the decision to reschedule the event.

Sent off the 11-8 favourite for trainer Tom Symonds and jockey Aidan Coleman, Song For Someone raced on the heels of the pace-setting Quick Grabim but looked to be beaten as Diego Du Charmil seized control coming to the penultimate flight.

Coleman was working hard on his mount as Ch’tibello tried to edged out Diego Du Charmil after jumping the last, but Song For Someone found a second wind, coming flying down the outside to pinch victory on the line.

He beat Diego Du Charmil by half a length – giving Symonds the biggest win of his career to date – with the game Ch’tibello a further neck back in third.

Song For Someone is not entered in the Champion Hurdle and Symonds said: “He is a horse that probably wants two and a half miles and he missed a hurdle for the first time in a while today.

“I didn’t forget the entry (for Champion Hurdle) and I did ask, but she (owner Lady Gibbings) said, ‘don’t be ridiculous’. He is only five still and it would need to be soft ground at Cheltenham.

“It’s huge. I know everyone will be (thinking) what a trial that is for the Champion Hurdle as he is not in the race, but the fact is it is huge for us. He is a horse that stands out as he is the best we have and should get better and better.

“At home you wouldn’t pick him out on the gallop at all, but you show him a flight of hurdles and he goes, and that is the kind of laid-back horse that will last (a) long (time).

“We had the chance of coming here or going to Fontwell (on Sunday). I thought the track here would be better on soft ground, then the ground dried out and I thought we had made the wrong decision as he wants a stiff two miles.

“Halfway up the straight I was thinking wrong decision and what an idiot.

“Two and a half miles at Aintree we could go perhaps, but I will talk to Louise and Peter (Gibbings). It’s a huge success for everyone at home as winning a Grade Two is just a huge thing.”

Diego Du Charmil was returning to hurdles after two runs over fences and Paul Nicholls will continue to mix and match with his runner following his narrow defeat.