Recast as the loyal lieutenant to Australia’s new Test captain, Steve Smith has advice for Pat Cummins that can only have come from the hardest of personal experience.

On becoming leader of the Australian men’s team, there are some things you can only understand through actually living them.

No one in the side walking out onto the Gabba on Wednesday for the start of the Ashes series knows this better than Smith, having forged through a hellish 2018 to return to a titled position of leadership. There is unmistakable excitement for Smith, but no doubting the gravity of his perspective. 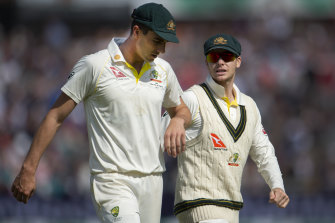 Steve Smith knows Pat Cummins won’t be able to fully understand the Australian captaincy until he has lived it.Credit:Getty

“From my point of view to Pat, there’s plenty that goes with the role,” Smith told The Age and The Sydney Morning Herald. “You’re busy a lot of the time, the on-the-field stuff is probably the easy part of it. It’s all the meetings and media and talking to managers and coaches and strategy. There’s plenty to do off the field.

“I think Pat is aware of that, but he’ll obviously experience it as he goes through it to understand it fully. He’ll do a great job, he’s learned a lot the last few years as vice-captain, and I’ll help him wherever I need to.”

Something Smith also knows better than most is the importance of taking time out from the demands of leadership to reset and refresh. His drained visage during the last Ashes series in Australia in 2017-18 is an image that has stayed with many around him.

Asked how the pair will work out when the time is right for Cummins to take a break and for Smith to take the reins, the vice-captain replied:

“I’m there to be leant on whenever Pat needs a hand. We’ll develop as we go, we’ll see where everything lands. But at the moment it’s just that we’ve never worked together in this capacity before. So, I think we’ll test the waters the next couple of games and evolve and grow as we go. I’m just here to help wherever I need to.

“I’ve known Pat for a long time, we get on very well, we’re good mates, so we’re able to have open and honest conversations and help move this team forward. It’s an exciting time.”

As Australia’s No. 4 batter, Smith has recently been reunited with Michael Di Venuto, the coach who mentored him through the period, between 2013 and 2016, in which he became the outstanding performer known around the world.

“His philosophy is not coaching everyone the same,” Smith said. “He’s very different with everyone, the way they play, and he urges each and every one to find the way they want to play and just get better at that, and he’ll help you through it.

“He’s so calm, the way he goes about his business and the way he communicates. I still remember today what he said to me back in 2013, where I hadn’t scored the runs I wanted, and he said, ‘You’re not out of form, you’re out of runs, and there’s a difference’.

“I’ve shared that with others in the past as well. There’s a difference if you’re hitting the ball really well, translating that to runs, sometimes it doesn’t quite happen. But if you keep the faith and keep doing the same things over and over, things will turn for you. Having his wisdom and knowledge around is very valuable for this team.”

That 2013 advice was followed by a starburst of scoring almost beyond compare. Over the next three years, before Di Venuto left the team to become head coach of Surrey, Smith played 27 Test matches and piled up 3027 runs at 77.61 with 13 hundreds. It seems a most opportune time for that relationship to resume. 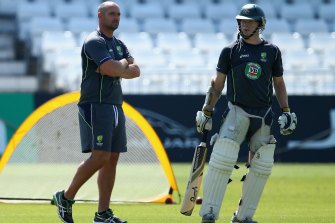 “The start of an Ashes series is hugely important, to try to put your best foot forward and get in front of the series,” Smith said. “Hopefully we can replicate what we’ve been able to do in the last few series and win that first Test match, and move on from there and build momentum.

“The centre wickets we’ve had, the bowlers have been steaming in full tilt, and it’s been really competitive. We were kind of wishing we’d started four or five days ago, we’ve had a pretty long prep and guys are champing at the bit to go out and get started.”

Something else that Smith has experienced before, and has missed throughout two years of the COVID-19 pandemic, is a feeling a little less complicated than the weight of leadership. It’s the energy he draws from a sell-out crowd, the kind he hopes to see at the Gabba.

“Honestly I can’t wait to play in front of a packed stadium again,” he said. “It’s been a while since we’ve had a completely packed stadium. We love entertaining, we love playing in front of the fans and putting on a show. It’s certainly different to when there’s no one at the ground, that’s for sure, and the energy and atmosphere that’s created is so different. I’m really looking forward to it.”