Steve Smith added the celebration to a solemn and sentimental day in Cairns on Sunday, scoring a century to set Australia up with a 3-0 one-day series victory over New Zealand to retain the Chappell-Hadlee Trophy.

Following tributes to the Queen and retiring one-day captain Aaron Finch, Smith scored 105 from 131 balls, propelling Australia to 5-267, and ultimately a 25-run victory after the spirited Kiwis were restricted to 242.

It was Smith’s 12th one-day hundred and one of his best for the way he controlled Australia’s innings before being bowled with less than six overs remaining.

“I’m pretty relaxed,” said Smith, who was named player of the match and series. “I feel like I’m hitting the ball nicely.

“Just trying to keep things as simple as I can. There’s not too much you can do on that sort of wicket, just swim between the flags in a way and not do anything too stupid.”

On another slow pitch that made early scoring difficult, Smith and Marnus Labuschagne (52 off 78 balls) came together at 2-16 and respected the conditions to avoid another batting collapse, adding 118 in 22 overs.

“It was just about getting partnerships together and not overthinking things,” Smith said. “It was never going to be a high scoring wicket, so it was just getting through that new ball, limiting the damage for a bit, and getting a partnership.

“Marnus and I were able to do that after the first two wickets and just set us up for that back end, where we could go a bit harder and post what I think was a pretty good total on that wicket.”

Alex Carey (42 off 43 balls) and Cameron Green (25 from 12 balls with two sixes) entertained the crowd with some late hitting.

Every time the Kiwis began mounted a serious challenge, they lost a wicket. Skipper Kane Williamson was runout out in a dreadful mix-up with Glenn Phillips for 27 from 56 balls.

“We needed to apply pressure for longer,” Williamson said. “Throughout the series we weren’t clinical enough and credit to Australia, they are always a strong side.

“They have a number of weapons throughout their attack and they bowled beautifully. It’s so frustrating. For us, there were glimpses, but it is about taking it further.” 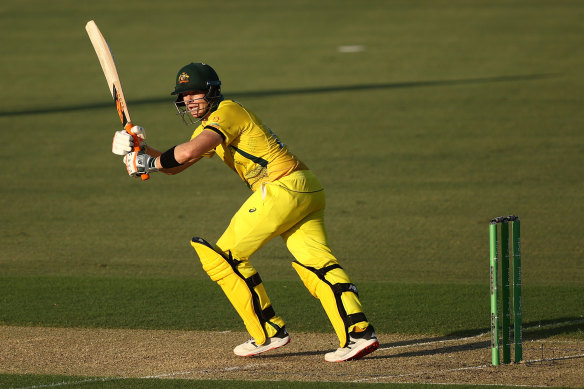 The decisive moment came in the 46th over when Phillips was caught at deep square leg by Sean Abbott for 47. Abbott threw the ball up as he came perilously close to the boundary rope then stepped forward to take it again, with the third umpire ruling in his favour.

Before play, both teams lined up on the boundary rope and the crowd stood for a minute’s silence to acknowledge the Queen’s passing as her portrait was shown on the scoreboard. The players took the field with black armbands.

To pats on the back from teammates and a hug from former housemate Glenn Maxwell, Finch, walked out for the final time as an Australian one-day player to warm applause.

Then New Zealand formed a line and applauded Finch, with Williamson stepping forward and shaking Finch’s hand, acknowledging the decade of strong service the opener has made to Australian white-ball cricket as a dynamic batsman and captain.

That’s where the sentimentality ended as New Zealand’s quality pace attack squeezed Finch and his teammates.

After a sedate start by Finch, an ambitious drive at a perfectly pitched Tim Southee off-cutter on five resulted in shattered stumps, and it was all over. After 146 one-day matches, including 55 as captain, Finch finished with 5406 ODI runs at 39 with 17 centuries.

The crowd stood and applauded as if Finch had made a century. Later they called for him to bowl the final over. He declined.

Finch’s announcement of his one-day retirement on Saturday was timely. Following a second-ball duck last Thursday, Finch has seven single-figure scores in his past eight one-day innings.