The Sydney Sixers bombed their biggest ever Big Bash total on a night where the Melbourne Stars were bowled out for 61 – the third lowest total in the tournament’s history.

Josh Philippe and Moises Henriques put on T20 masterclasses with the bat to steer the Sixers to a 152-victory in their one-sided season opener over the Stars. 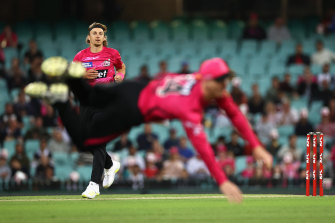 Tom Curran of the Sixers watches the ball after bowling during the Men’s Big Bash League match between the Sydney Sixers.Credit:Getty

The Sixers, the two-time reigning BBL champions, registered their highest ever BBL total of 4-213, eclipsing the 4-205 they made against the Melbourne Renegades in Hobart last December.

It was the seventh largest total of all-time, 19 runs short of the 5-232 the Thunder amassed against the Sixers in January, thanks to 83 off 47 balls from Philippe and an unbeaten 76 from 38 balls from Henriques.

The Stars’ run chase was over before it began. Spinner Steve O’Keefe bagged two wickets in his first five deliveries – before finishing with 4-14 – to set the tone for the home side who bowled a woeful Stars side out for 61.

At 9-47, the Stars looked like they might struggle to make it past 57, the competition’s lowest ever total, but some late resistance from No.10 Brody Crouch and No.11 Syed Faridoun saved them from utter humiliation. 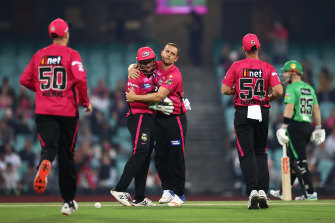 With no Marcus Stoinis, who was a late withdrawal due to a side strain, the Stars’ top-order lacked the firepower it has possessed in recent years.

When Maxwell was clean bowled for four by Sean Abbott, the Stars fell in a major heap, losing 6-6 on a night where little went right.

Philippe was the competition’s third leading run-scorer last year with 508 runs and has begun this tournament with the same clean ball-striking that has earned him 13 international appearances – three one-day internationals and 10 T20s – this year.

Philippe and James Vince began cautiously before plundering seven boundaries within 11 balls to get the innings rollicking along.

It was a change in tactic from the Sixers, who opted to push Daniel Hughes down the order from his customary opener spot.

The pair picked off gaps with ease in a 90-run opening partnership before Vince was caught at cover. The Englishman gave Maxwell a death stare, clearly displeased with his lively celebration.

Once Philippe passed 50, he went to another gear. His lap shot over short fine leg was classy but two sixes into the SCG members pavilion, one of which hit the roof, was power hitting at its finest.

Broadcast technology estimated the six would’ve travelled 122 metres, had it not crashed into the green member’s roof just metres from where Mark Waugh famously hit the clock in a match in 1997.

But just as Philippe got going, Henriques did just as much damage at the other end.

The Sixers skipper brought up his half century from 29 balls with a six down the ground and muscled the ball to all parts of his home ground in blistering fashion.

Scheduling a Big Bash opener on a Sunday night in Sydney did not pay off from a crowd perspective, with an underwhelming crowd of 10,013 making it out to Moore Park.

As far as games go, it’s probably a good thing so few saw it.