Home » Sports News » Shrewd glovework keeps Paine in contention, the rest is up to Bailey

Perhaps not since 500 spectators and a gaggle of television cameras turned up to see Shane Warne’s return from a drugs ban 17 years ago have more eyes been trained on a state second XI game.

And of those observing Tim Paine’s return to cricket in Hobart after his dramatic resignation as Test captain of the Australian men’s team, none were watching more keenly than his close friend, business partner and the selection chair George Bailey.

Obligingly, the South Australia seconds offered up six catches for Paine on a sunny day at Lindisfarne Oval, a couple of them in the top tier for wicketkeepers.

Winter and then back surgery had caused Paine to endure a long wait until his return to play, although the three days between Friday’s tearful announcement and the toss of the coin on Monday morning would have felt like an eternity in their own way.

“It’s been a long while, I haven’t played since last year, so I’m looking forward to it,” Paine had told Win News before play, before adding about his recovery from surgery, “Yeah fine, no complaints, so good to go.”

Bailey and Paine have some difficult territory to traverse over the next two and a half weeks before the start of the Ashes series, as the former Tasmania captain and now chief selector weighs up his ex-teammate’s physical and mental readiness for the task.

Paine’s recent record in Test cricket, certainly with the bat, is excellent, having played two of his very best innings in his past two series, against New Zealand and India. That being said, the span of these two series has been nearly two years due to Australia’s minimal Test match commitments after the onset of COVID-19. 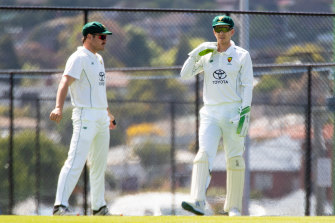 His glove work, still highly regarded, let Paine down on the critical final day of the SCG Test against India, when his words from behind the stumps were also worthy of some censure – by his own admission.

In trying to balance his selection responsibilities with his closeness to Paine, Bailey would do well to recall the words of his predecessor Trevor Hohns, who presided over the exits of former teammates such as Ian Healy and Steve Waugh himself.

“They are the difficult ones, particularly when you’re dealing with someone you know and are reasonably close to,” Hohns told The Age and The Sydney Morning Herald earlier this year. “But in the end I was in the position of being chairman of selectors and you’ve got a job to do. So I tried very hard not to let my relationship with people come in the way of doing my job and trying to do it the right way.”

Paine had, according to the Australian Cricketers Association chief executive Todd Greenberg, done the right thing by resigning the captaincy when he was made aware of the imminent publication of explicit message and image exchanges with a former Cricket Tasmania staffer in November 2017.

“Tim took it upon himself to make what I think was a very selfless decision, and in some respects showed the true leadership qualities that we know he has had,” Greenberg told SEN Radio. “He put the office in front of himself, he understood that those actions now becoming public would make it very difficult for him to continue, and also trying to put the team above himself, and I think he made the only decision literally that he could do.

“The way he handled himself last week was credit to him and the way that he was the one person in cricket at that time who put the game first.

“Enormous risk knowing that it may come out and I think in Tim’s words, at the beginning of every series or difficult moment, he felt it was likely to come out. So that heavy burden that he carried, I get a sense last week, as difficult as it was for him and his family, there’ll be a sense of relief that it’s actually dealt with, and that burden won’t hang over the top of him any longer.”

Paine has effectively acknowledged that his leadership was always going to be untenable the moment the exchanges became public knowledge, whenever that may have happened.
But Greenberg said that he would be making sure he engaged in dialogue with his CA counterpart Nick Hockley to ensure that there was clarity over exactly what standards that players, and the captains of their teams, would be held to in the future.

“There will absolutely be discussions with CA and I’ve started those over the weekend,” Greenberg said. “In any of these dealings we all learn a lot. But we need to align ourselves in a discussion about expectations of people. That’s the clear issue for me.

“We live in an era of instantaneous opportunity for people to make commentary and an era where social media is prevalent. I just want to make sure we don’t set ourselves up to fail – people are human beings, they’re going to make errors from time to time. When you’re in public life, those errors are highlighted.”

Bailey, too, will have expectations of Paine, and a couple of weeks in which to assess whether they can be met at the Gabba.