Peter Lawrence, according to Rob Waterhouse, is one of racing’s most astute experts and gives Incentivise as an example.

The homebred major hope of the Australian side, Incentivise will be out to buck major hurdles in Melbourne Cup at Flemington, and Lawrence is a tad apprehensive about the last 200 metres.

“If the race was 2800 metres I would be very confident indeed,” Lawrence decreed from Byron Bay lockdown.

The short odds is another negative: only three favourites at $3.20 and under in the Melbourne Cup have scored since 1892 from 26 attempts. But, of the beaten brigade, very few had the credentials of Incentivise.

Lawrence spotted Incentivise at Eagle Farm on June 6 in a common race over 1810m that the gelding won by nine lengths.

“He had an ungainly action but his finishing section compared very well with the Lightning Handicap [1000m] on the same program,” he recalled.

Lawrence enthused to Waterhouse, who mentioned to wife Gai and training partner Adrian Bott that they should buy Incentivise for a $1 million – a steep price from Toowoomba bush bred.

“I don’t know whether they made an offer,” Waterhouse said. Lawrence did. Alas, while attempting to form a syndicate, he was gazumped by Peter Moody acting on behalf of a group that purchased half of the rising star.

“Because of my early interest, Steve Tregea [the breeder-owner] graciously allowed me to buy a share in his half,” Lawrence explained. 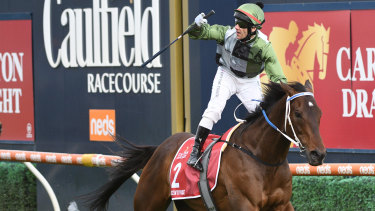 Incentivise’s Caulfield Cup win suggested there was more in the tank.Credit:Getty Images

Incentivise was responsible last start for one of the most dominating Caulfield Cup successes of our time, which skyrocketed him into $2.30 Cup favourite last week before easing to the degree that Waterhouse figures the tote will have him around $3.50.

“Incentivise $2.30 to win the Melbourne Cup? Breeding doubt at 3200 metres lumping 57kg. I wouldn’t take $2.30 the place. How dumb do bookmakers think we are,” John Tutty wrote in a letter to Winning Post.

However, Lawrence counters that Dom Beirne, an acclaimed authority, reckons the Queensland stayer will win by 2½ lengths.

“Another good judge has him at $1.90,” he added. Waterhouse, though, is cautious.

“I’m thinking more the lightweights,” Waterhouse reckoned. “In fact, I like Lord Lucan [trained by Gai] more than my wife does.”

Lawrence rates Tralee Rose as the horse for Incentivise to beat, with possibly the latter stages coming into play.

On the breeding score, positives and negatives can be gleaned in a pedigree. But the greats overcome what stops the normal. Take another outstanding Queenslander, Gunsynd. Old-timers will say the Goondiwindi grey “never got two miles”. Of course, he wasn’t bred to run 1600m either, but in the 1972 Melbourne Cup he humped 60.5kg – 3.5kg more than Incentivise will carry – and finished third to Piping Lane (48kg) after being three and four wide throughout. Given an easier passage and Incentivise’s handicap, he would have handled the distance considerably better.

From the point of local class, Verry Elleegant scores high and, in the opinion of racing.com’s Daniel O’Sullivan, her Cox Plate effort was excellent: “I’ve long held the view that Verry Elleegant is a genuine stayer and her best ratings at 2400 metres and signs within those performances that she could be even more effective over further. Her run in last year’s Melbourne Cup from an impossible position was terrific and, off what we saw in the Cox Plate, she can carry 57kg and be right there with the best of the others behind Incentivise this year.”

Still, I pledged not to go into another local stayer in a Melbourne Cup who hasn’t had a 2400m lead-up after So You Think (2010) could only run third at 3/1. Yes, respect Chris Waller’s systems, but I don’t think she has had the foundation of last year when she scored in the Caulfield Cup.

My danger to Incentivise is Twilight Payment, a proven two-miler having the benefit of the Lloyd Williams involvement, with another Waller charge, Great House, a lightweight chance.

Maybe Incentivise is too short for comfort but a trifecta could be the way to go. Meanwhile, Lawrence will miss the thrill of every traditional racing man of being at Flemington for a Melbourne Cup runner. He’ll have to make do with a suite at the Beach Hotel in Byron Bay.